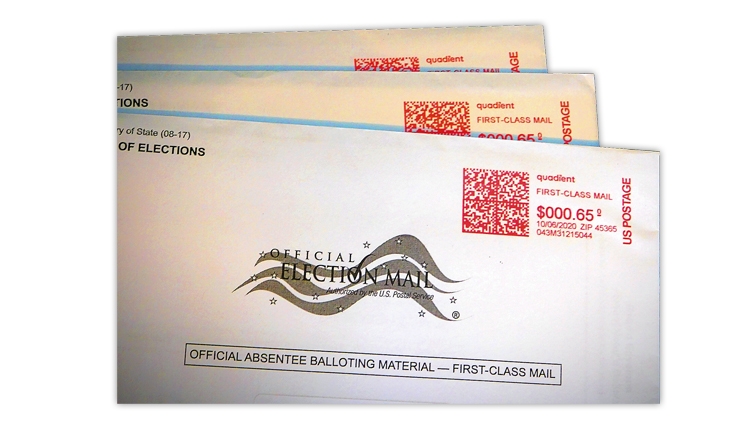 The United States Postal Service reported its financial situation for fiscal year 2020 during a Nov. 13 USPS board of governors meeting. The postmaster general praised postal workers for their handling of election mail.

The current pandemic has spurred a drop in first-class mail that United States Postal Service officials fear could become permanent.

That was the sobering analysis the top financial officer for the USPS gave to the Postal Service board of governors on Nov. 13, telling them that the agency fears mail volume “may never recover to its pre-pandemic levels.”

The long-term consequences of such a shift could have profound consequences for the financially troubled Postal Service, which has relied on first-class mail to provide a firm financial foundation for its operations.

“There continues to be great uncertainty over the future impacts of the pandemic on the Postal Service,” said Joseph Corbett, the agency’s chief financial officer.

While the pandemic triggered a welcome surge in package mail, Corbett said that increase is expected to be short lived.

Package revenues are not likely to “make up for our losses in mail service caused by COVID-19,” he told the board.

Package revenues surpassed first-class mail revenues in the fiscal year ended Sept. 30, a milestone in a year that saw the agency post yet another multibillion dollar loss.

Postmaster General Louis DeJoy warned that the agency’s losses could be more than $10 billion a year without changes to the agency’s “broken business model.”

He and the governors praised the Postal Service’s workforce of 644,000 for pressing forward during the pandemic and election mail controversies.

“ … Despite substantial political rhetoric and misleading sensationalism, we kept our focus on the mail and delivered for the nation,” DeJoy said.

The governors did not discuss the controversial changes in mail operations that accompanied DeJoy’s arrival at Postal Headquarters in mid-June.

Those changes, which DeJoy stopped until the election, infuriated Democratic House members.

They charged that the postmaster general was attempting to undermine voting by mail in the Nov. 3 elections with changes that significantly slowed mail deliveries.

Board chairman Robert Duncan spoke of the “unfortunate politicization of the Postal Service” and praised DeJoy for making election mail deliveries his “No. 1 priority.”

DeJoy said the agency delivered on the election mail issue because of its workers.

With his comments, DeJoy became the latest in a string of postmasters general to call for changes in USPS operations. He promised to work with the governors, Congress, postal unions and others to revise the laws that govern postal operations.

Fredric Rolando, president of the National Association of Letter Carriers, said: “These figures, driven by the economic shutdown's impact on first-class mail, show the need for federal assistance during the pandemic, just as other sectors have received.”