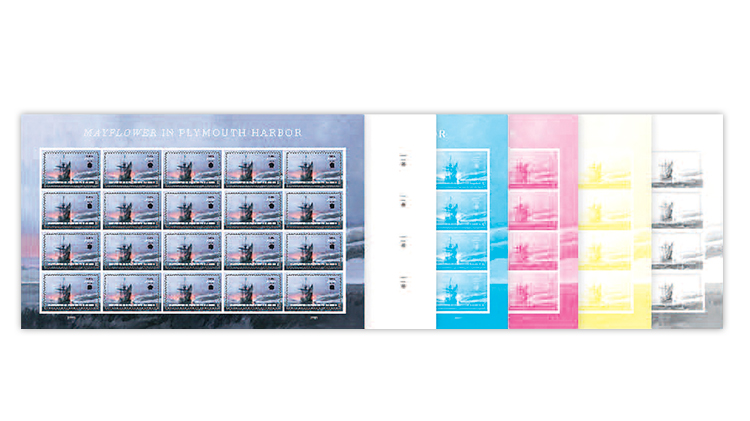 The U.S. Postal Service plans to sell a set of five single-color proofs in association with the release of the Mayflower in Plymouth Harbor stamp on Sept. 17. The proofs will be sold with a book about the Mayflower and the new stamp.

It appears that the upcoming Mayflower in Plymouth Harbor forever stamp will include an intaglio (engraved) element in the design.

The United States Postal Service will offer a limited number of proof sets for its upcoming Mayflower in Plymouth Harbor stamp.

The single nondenominated (55¢) stamp is scheduled to be issued Sept. 17 in a pane of 20 to commemorate the 400th anniversary of the 1620 Mayflower landing in America.

The proof sets are included with the purchase of a book that is also titled Mayflower in Plymouth Harbor.

“This beautiful book tells the story of the Pilgrims and reveals the fascinating details behind the creation of the Mayflower in Plymouth Harbor Forever stamp,” according to the Postal Service.

“Comes with five progressive stamp proofs, the final stamps in a pane of 20, and a numbered certificate of authenticity.”

The edition is limited to 2,500, according to the Postal Service.

Orders will be taken beginning Aug. 17 on the USPS online store. The cost for the book plus the stamp proofs is $59.95.

The proofs show single colors from the stamp printing on four individual panes in cyan, magenta, yellow and black, plus a fifth pane with intaglio black printing that appears to show “USA,” “forever” and an emblem or other small design element not evident on preliminary artwork for the stamp that was revealed in October 2019.

The proof sheet offering appears to be similar to a set of sheets offered to collectors in 2013 in association with the Jenny Invert pane of six $2 stamps (Scott 4806).

A note in the Scott Specialized Catalogue of United States Stamps and Covers reads, “A book containing an unused and a first-day canceled example of No. 4806, along with items that are termed ‘proofs’ and ‘die wipes’ sold for $200.”

The offering of the Mayflower set described in the Quarter 3 issue of USA Philatelic, the USPS retail mail-order catalog, does not mention a first-day canceled pane or “die wipes.”

The die wipe in the Jenny Invert set consisted of a small pane with blurred blue and red ink impressions that the Postal Service described as “an authentic section of the die wipe used during the press run.”