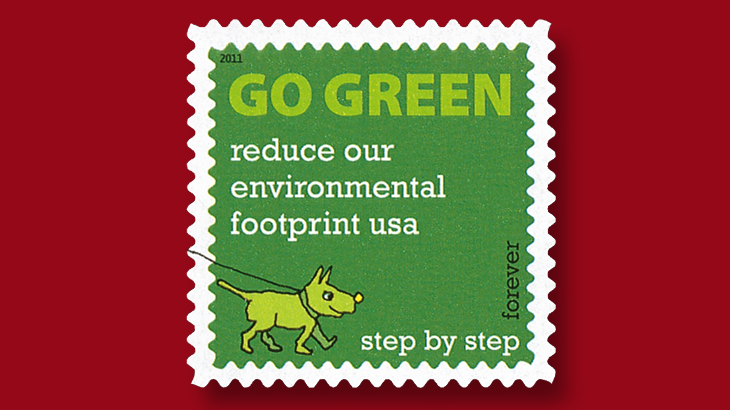 One of 16 United States Go Green forever stamps issued in 2011.

The United States Postal Service began a national recycling program in fiscal 2014, spending $33 million in “an overarching initiative to drive waste and costs out of operations,” according to a report from the USPS Office of Inspector General.

In many respects, it was supposed to be a program that followed the example set on the 16 Go Green commemorative forever stamps issued in 2011 to urge greater conservation and recycling efforts (Scott 4524).

The report by the agency’s inspector general, issued Feb. 22, shows the Postal Service’s plans have fallen far short of expectations and that the USPS may not be able to meet the program’s long-term goal.

Trash reduction savings were $5.1 million instead of the projected $32.8 million, the report said.

Recycling revenue was supposed to hit $14.3 million, but came to only $3.4 million, the Inspector General said, citing the program’s first four years.

The report blames “ineffective monitoring” at postal headquarters, saying the program “was not fully rolled out and there were no controls to ensure accurate recording of revenue/cost activity.”