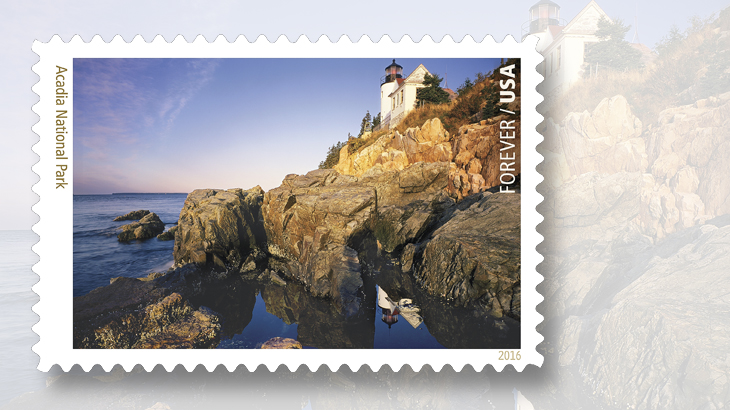 “The park is home to many plants and animals, and the tallest mountain on the U.S. Atlantic coast,” the U.S. Postal Service reported in an April 4 press release announcing the stamp image. “Today visitors come to Acadia to hike granite peaks, bike historic carriage roads, or relax and enjoy the scenery.”

The stamp design is the first from the set of 16 to be revealed by the Postal Service, after announcing on March 31 that the National Parks set will be issued June 2 at World Stamp Show-NY 2016. The international stamp show will take place May 28-June 4 at the Javits Center in New York City.

The stamp set will celebrate the 100th anniversary of the National Park Service, which was created when President Woodrow Wilson signed the act creating the government agency on Aug. 25, 1916.

The new designs will be revealed one by one over the next three weeks.

Acadia National Park was previously commemorated May 30, 2001, on a 60¢ stamp in the Scenic American Landscapes series of airmail stamps (Scott C138), and on two varieties of a 7¢ black stamp in the 1934 National Parks Year commemorative set (746 and 762).