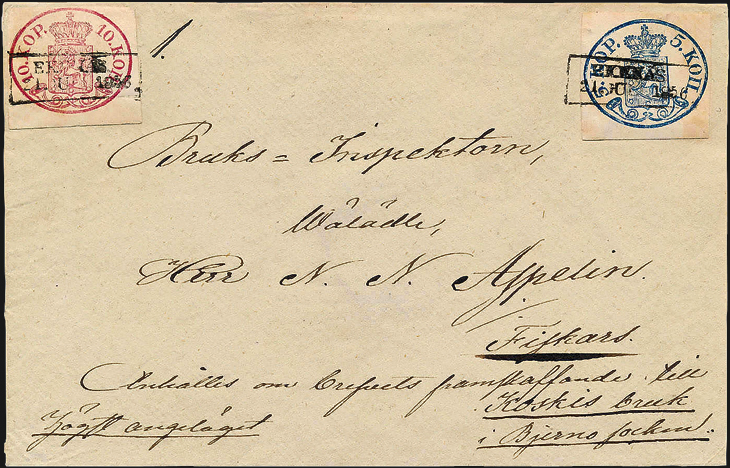 A classic cover from Finland franked with two of its first-issue typographed stamps. The unique triple-rate cover will be offered during Postiljonen’s Sept. 29-30 auction in Malmo, Sweden.

Though known for its ample auctions of Scandinavian material, including appealing rarities, postal history and larger lots, the Postiljonen international auction house also offers a diverse selection of worldwide material in many of its public sales.

That’s true as well for the upcoming Sept. 29-30 auction, which is taking place at the Postiljonen offices in the Oresundshuset building at Hans Michelsensgatan 9 in Malmo, Sweden.

Along with items from award-winning collections of Iceland, Finland, Denmark and more, the Postiljonen auction includes hundreds of lots of worldwide material, plus interrupted mail of Scandinavia from the gold-medal collection of Norwegian exhibitor Hallvard Slettebo.

This sale also presents part three of the Gummesson collection of classic Finland in a separate catalog.

The Gummesson collection features Finland’s first-issue typographed oval stamps of the 1850s, a selection of the serpentine roulette issues that followed, and dozens of lots from the 1875-84 Coat of Arms series.

Postiljonen points out that the auction includes important items from Gummesson’s grand prix d’honneur exhibition of Finland at Melusina 1963, the international stamp exhibition in Luxembourg.

Among the outstanding postal history items from this collection is an 1856 cover franked with one each of the first two stamps of Finland: the 5-kopeck blue with small pearls (Scott 1) and the 10kop rose (2).

The stamps are placed one each in the top corners, and the combined franking pays the short-distance domestic triple rate from Ekenas to Koskis Bruk. Each stamp is struck once with a boxed Ekenas postmark dated July 21, 1856. The stamps have light toning from the gum “of no importance,” according to Postiljonen.

Described as the unique triple-rate cover, it is accompanied by a 2016 Cyril Schwenson expert certificate describing the cover as genuine with the correct rate and no repairs, and listed with a starting price of €50,000 (approximately $60,030 in early September).

More than 300 lots of classic Iceland offered in this auction include part 2 of the Hjalti Johannesson gold medal collection, as well as a remarkable selection of Iceland’s sought-after overprinted stamps from the turn of the 20th century.

A fabulous rarity from the Johannesson collection is a Reykjavik-to-Copenhagen cover franked with a single of Iceland’s 8-skilling brown issue of 1873 (Scott 3), a stamp listed in the 2017 Scott Classic Specialized Catalogue of Stamps and Covers with an on-cover value of $44,000.

Any cover from Iceland franked with a skilling-denomination stamp is scarce: The country’s currency changed just three years after the first stamps were issued in 1873.

Formerly gracing the collections of Holger Craaford, Roger Swanson, and Roger Schnell, as well as Johannesson, the 8-skilling brown cover is offered with a starting bid of €30,000 ($36,060).

The catalogs for these upcoming Postiljonen sales are found online, and additional information is available from Postiljonen AB, Box 537, SE-201 25 Malmo, Sweden.