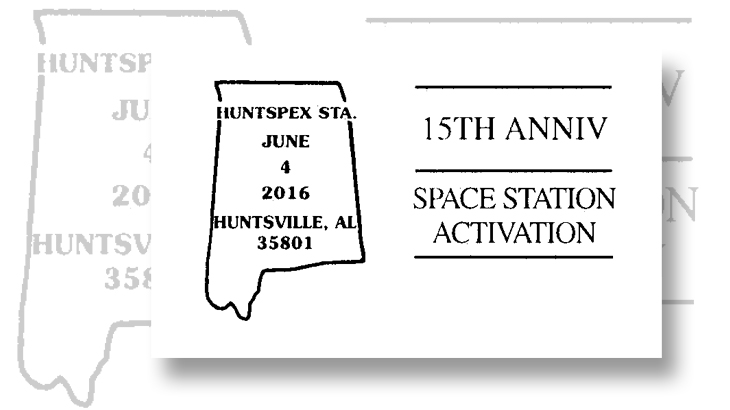 In conjunction with its Huntspex 2016 stamp show, the Huntsville Philatelic Club in Alabama is sponsoring a postmark celebrating an anniversary for the International Space Station.

A postmark commemorating the 15th anniversary of the International Space Station is being offered by the post office in Huntsville, Ala., home of NASA’s Marshall Space Flight Center.

The postmark is offered in association with the June 4-5 Huntspex 2016 stamp and postcard show presented by the Huntsville Philatelic Club.

The show takes place at the Conference Training Center at the University of Alabama in Huntsville, 1410 Ben Graves Drive, with free admission and parking. For more information, search for Huntsville Philatelic Club online, or on Facebook.

The postmark is similar to Huntspex postmarks from past years, with an outline map of Alabama and a commemoration of a space theme. It is being offered both days of the show.

The first components of the international space station were launched into orbit in 1998. It was occupied a little more than two years later and serves as an international laboratory, observatory, and research platform.

To obtain the Huntsville postmark, address your request to:

The following postmark has received a 60-day extension.

To request any of these postmarks, follow our simple instructions.