Postmark journal is a great resource, but there’s a lot more 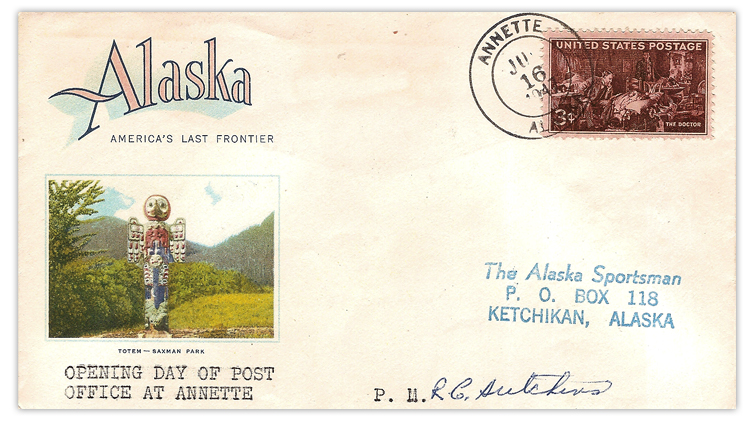 Earlier this year the Post Mark Collectors Club published its 800th issue of PMCC Bulletin, a nice milestone for any publication.

The club’s journal began in 1947 and is still published every month, with a combined July-August issue.

The September issue includes a full-color illustration of a cover postmarked in Annette, Alaska, on July 16, 1947, in the Postmarks from the Past column by Paul E. Petosky.

What’s significant about that? It happens to be the day that the Annette post office was established on the island. The cover has a cachet celebrating Alaska and a typewritten notice that reads, “Opening Day of Post Office at Annette.”

Bulletin editor Bill German mentioned that Petosky has been writing the feature for the Bulletin since 2002.

The Post Mark Collectors Club is an active group that does a lot more than just publish an entertaining and informative journal month after month. The club has its own museum and research center at the Margie Pfund Memorial Post Mark Museum and Library in Bellevue, Ohio.

“The goal of the museum is to provide education about postmarks and preserve postmark history,” the club said.

“The Museum’s holdings comprise the largest single collection of postmarks in the world, with nearly two million philatelic and postal history items in all.”

There’s also a well-organized online collection of more than 30,000 U.S. post office photos that anyone can access. Check the website and see if your town is represented.

Visit the Post Mark Collectors Club website to learn more about the club and its many resources for postmark collectors and postal historians. And while you’re there, add your support by clicking the membership link at the top of the page.

A little postmark for an enormous anniversary