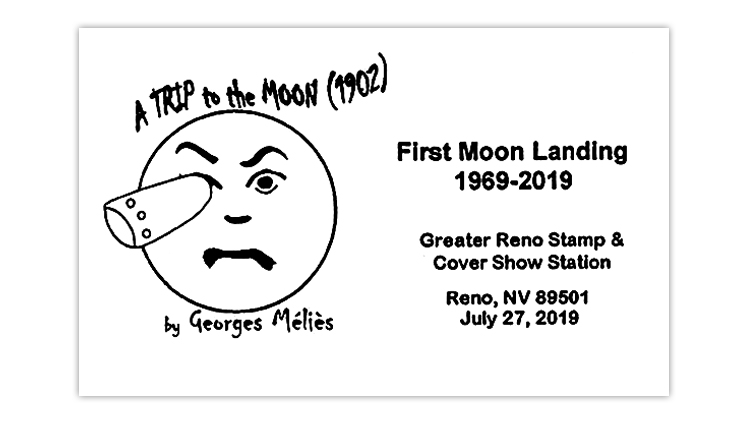 The July 27 pictorial postmark for the Greater Reno Stamp and Cover Show depicts the moment when the space capsule hits the moon’s eye in the 1902 film A Trip to the Moon.

The Greater Reno Stamp and Cover Show’s pictorial cancel celebrates the 50th anniversary of the first manned moon landing and remembers the 1902 French film A Trip to the Moon.

Written, directed, and produced by George Melies, the film takes a group of astronomers on an expedition to the moon where they escape captivity from lunar inhabitants. The group travels via a capsule, propelled by a cannon, that hits the man in the moon in the eye, an iconic image featured on the postmark.

Melies also stars in A Trip to the Moon, playing the lead role (Professor Barbenfouillis) alongside an ensemble cast of French theatrical performers.

The show cancel is available both days of the event, July 27-28, at the National Bowling Hall of Fame in Reno, Nev.