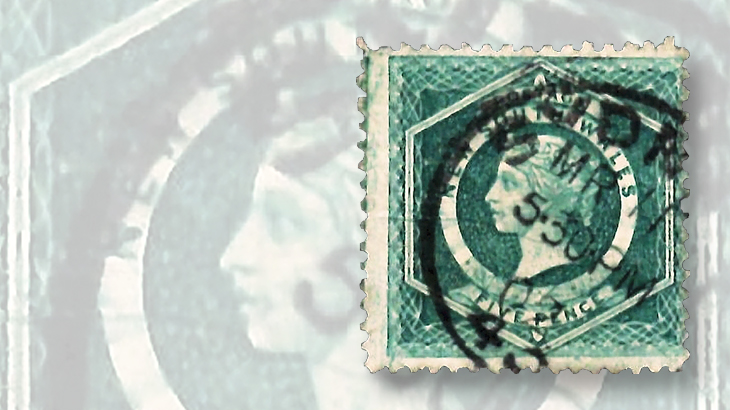 Early Australian colonial postmarks mimicked those of Great Britain. This is a standard circular postmark used on a mailpiece from Sydney, New South Wales, in 1882. 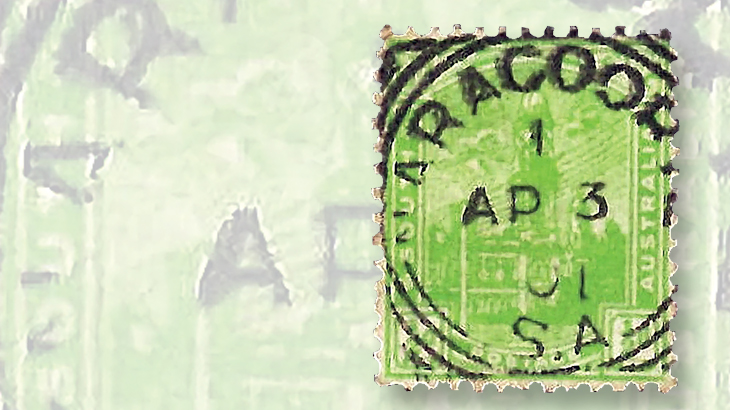 The post office in Adelaide, South Australia, appears in the stamp design, and the postmark is from Naracoorte, an Aboriginal word meaning “place of running water.” 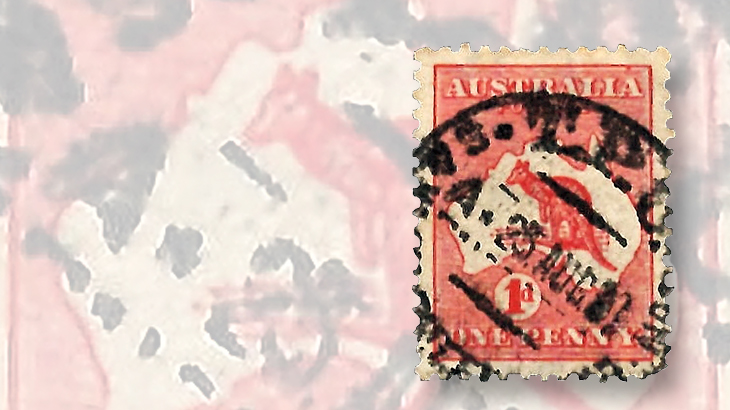 The “T.P.O.” marking stands for “Travelling Post Office,” and shows the mailpiece was carried by train. 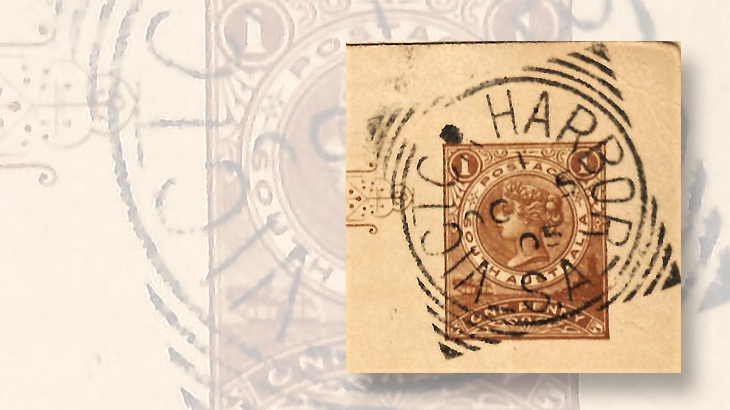 A 1-penny postal card mailed in 1905 from Victor Harbor, South Australia, was canceled with a squared circle postmark like those used in Great Britain at the time. 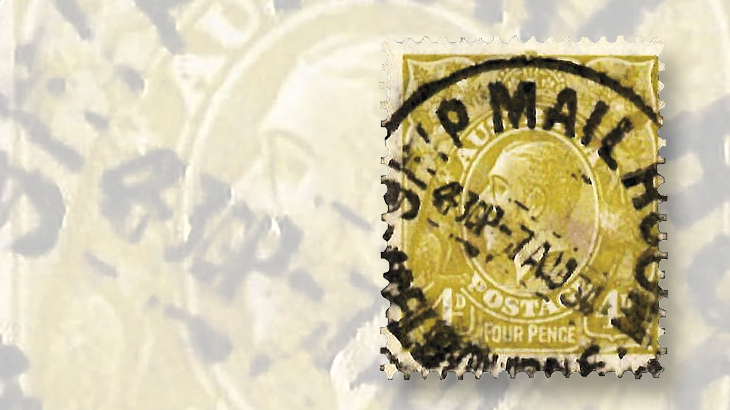 Another method of mail carriage was by ship, as indicated by the marking on this King George V 4-penny stamp. 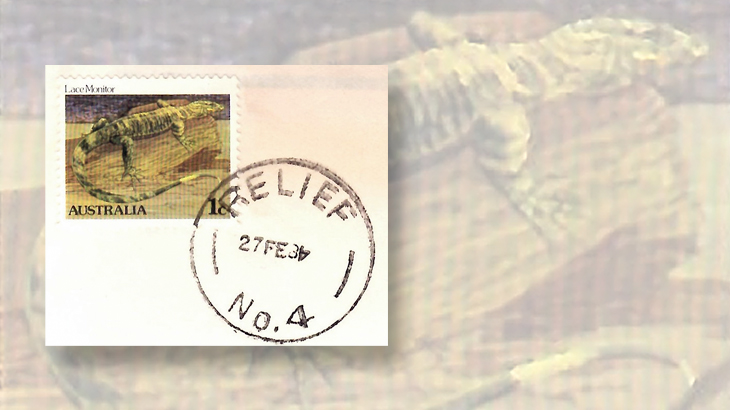 A “RELIEF” postmark such as this one on a 1981 stamp was used when the standard post office of origin postmark was missing or damaged. 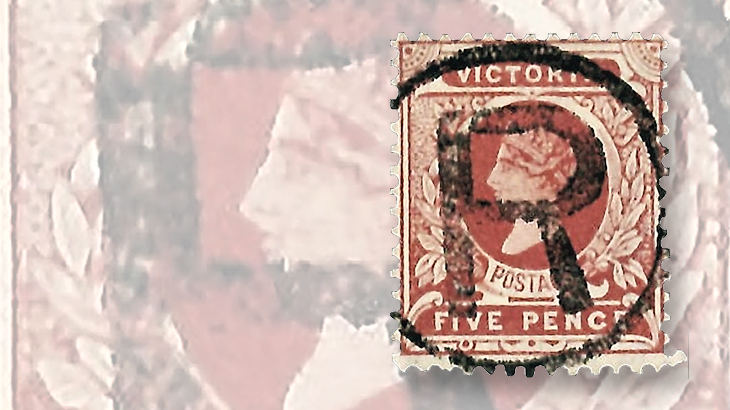 The “R” postmark indicating a registered letter obliterates this 1901 5-penny stamp from Victoria. 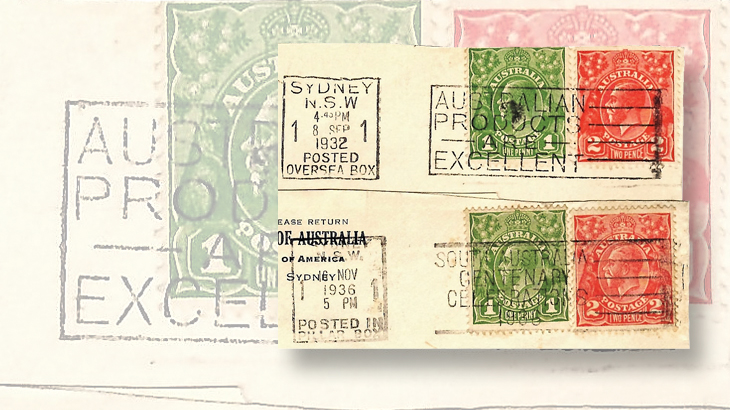 Postmarks on items deposited in pillar boxes: The top one, on a 1932 letter mailed from Sydney to the United States, indicates it had been properly posted in an “oversea” pillar box. The bottom postmark says “posted in pillar box,” because the letter was 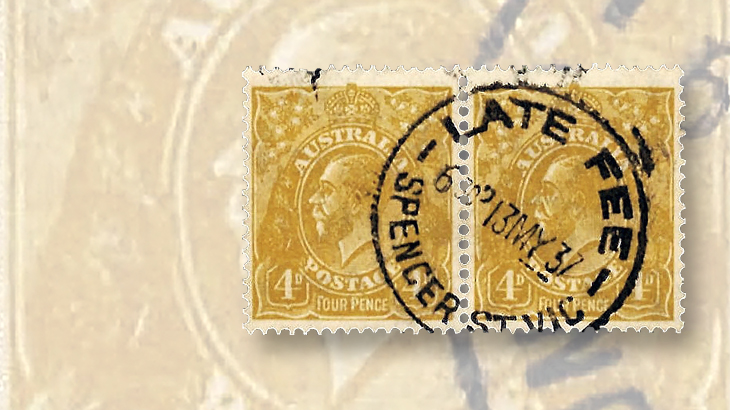 “LATE FEE” in this postmark on a pair of Australia 1931 4-penny King George V stamps means the mailpiece was posted after normal postal hours and a late fee was due if the item was to go into that day’s mail. 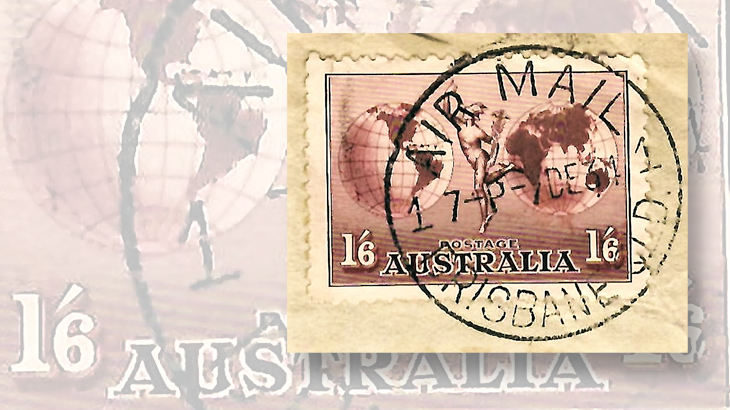 A letter flew from Brisbane, Queensland, to Great Britain in December 1934, franked with the recently issued airmail stamp showing Mercury and the hemispheres. 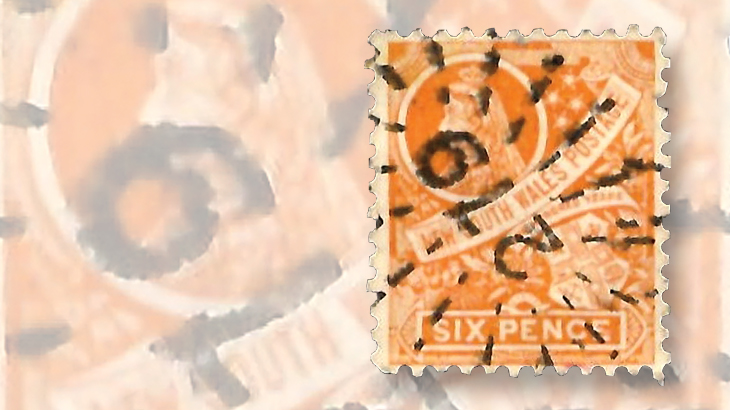 Similar to British numeral cancels of the era, this postmark on an 1899 stamp had a numeral within dashed rays. The “279” numeral denoted Murrumburrah, New South Wales.
Previous
Next

It’s fun to collect Australia stamps, with their widely varied designs representing the history and unique culture of the country.

It also is fun to collect Australian postmarks, which symbolize the geographic diversity of the huge continent, from large cities to tiny communities in the outback.

Australian postmarks are also opportunities to learn about the British colonies that became states within Australia when it reached nationhood.

The postmarks also present a linguistic challenge, because place names that show up in the markings may be written in any of the 20-plus Aboriginal languages. Looking up the translations of the place names can add to the interest of the collection.

The earliest postal markings on Australian letters were handwritten, handstamped or both.

These markings documented the mailing fees, date and place on each letter sent through the post office of origin.

Within a few years, handstamps were specifically made to obliterate the postage stamps, relieving postmasters the job of noting by hand the postage paid, date and post office of record.

It is hardly surprising that these British colonies had postmarks that bore a strong resemblance to markings used in the mother country of Great Britain.

A fairly standard circular postmark from colonial New South Wales is shown in the first illustration, on a 5-penny Queen Victoria (Scott 56b) stamp mailed from Sydney on March 11, 1882.

A later New South Wales postmark is shown in the second illustration, on a 6d Victoria and Coat of Arms stamp issued in 1899 (Scott 106). The postmark is similar to Britain’s numeral cancels, usually within a barred oval.

This New South Wales cancel is a numeral within dashed rays. The numeral “279” identifies the place where the stamp was canceled: Murrumburrah, New South Wales.

The third picture shows another British lookalike in the form of a squared circle postmark on a postal card from Victor Harbor in South Australia.

The place and date information is contained in a central circle partially surrounded by semicircles that become smaller and form the image of a square that contains the circle.

In the fourth illustration, a stamp from South Australia (Scott 114) shows the post office in Adelaide and has a postmark from Naracoorte, South Australia.

Naracoorte is an Aboriginal word that means “place of running water,” and probably refers to the Naracoorte Creek that runs through the town and several waterholes on the southwest side of the town.

In 1901, Australia became a federated nation within the British Commonwealth. All of the former Australian British colonies became states within the new nation of Australia.

Australia did not issue its own stamps until 1913, and thus the colonial postage stamps were still in use for the first dozen years of nationhood.

Specific postmarks were created for registered mail, ship mail, airmail and other kinds of delivery and fees. The fifth picture here shows an “R” registered mail cancel on a 5d Victoria stamp issued in 1901 (Scott 200).

The next illustration shows a pair of 4d King George V stamps (120, issued in 1931) mailed in 1937 from Spencer Street in Melbourne, Victoria.

The “LATE FEE” postmark indicates that the letter was posted after normal hours and therefore required payment of a late fee if it was going into the mailstream that day.

The next two illustrations show two postmarks that indicate how the item was carried in the mails.

The “T.P.O.” postmark stood for “travelling post office” on a train. “Ship mail” is self-explanatory, and the next illustration also is self-evident: the “AIR MAIL” postmark appears on a letter sent from Brisbane, Queensland, to Great Britain in December 1934.

The stamp is Scott C3, depicting Mercury and the two hemispheres, and had just been issued on Dec. 1.

The meaning of the “RELIEF” postmark in the next-to-last picture is a little more obscure.

The marking, which barely strikes a 1¢ Lace Monitor stamp issued in 1981, indicates that the normal postmark that would bear the town name from which the letter was mailed was missing or damaged and so the “relief” marking was used in its stead.

Two postmarks on mail that was collected from a pillar box are shown in the final illustration. A pillar box refers to a free-standing public post box shaped like a pillar, as opposed to one attached to a pole or set into a wall.

The top postmark notes that the letter, addressed to the United States, was posted in an “oversea box.” A slogan promoting the excellence of Australian products cancels the two stamps.

The bottom postmark was posted in a standard pillar box in 1936 to a destination within Australia. The slogan in this instance draws attention to the centennial of South Australia.

Only a few of the hundreds of types of Australian postmarks have been mentioned in this column. Examples can be collected on loose postage stamps or on envelopes or pieces of envelopes. Start small with stamps you may already have in your collection, and then add to the postmark collection when you see a postmark that catches your eye.