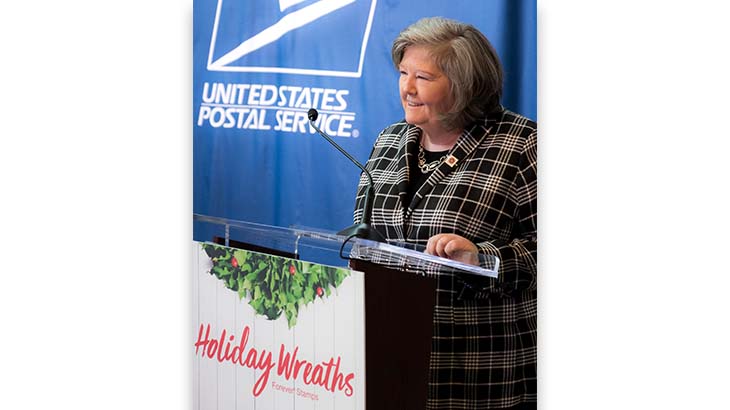 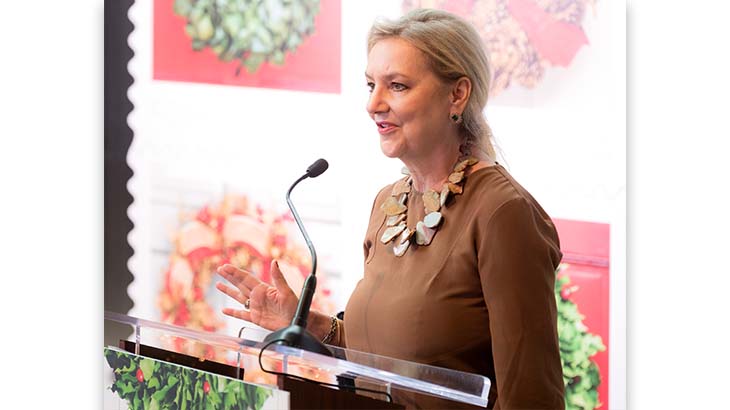 Floral designer Laura Dowling, who was the White House chief floral designer from 2009 to 2015, spoke at the first-day ceremony for the Holiday Wreaths stamps. 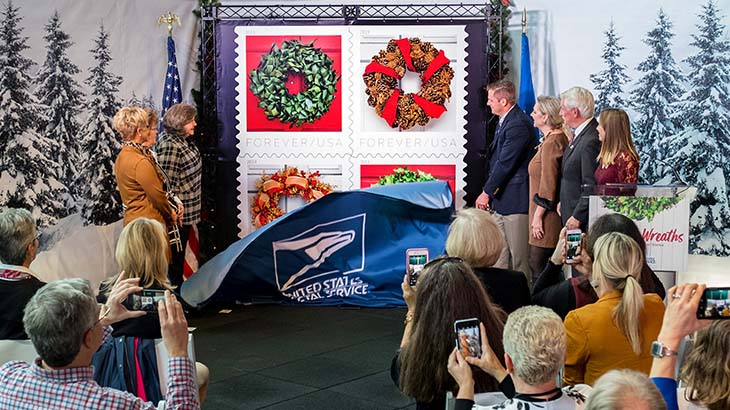 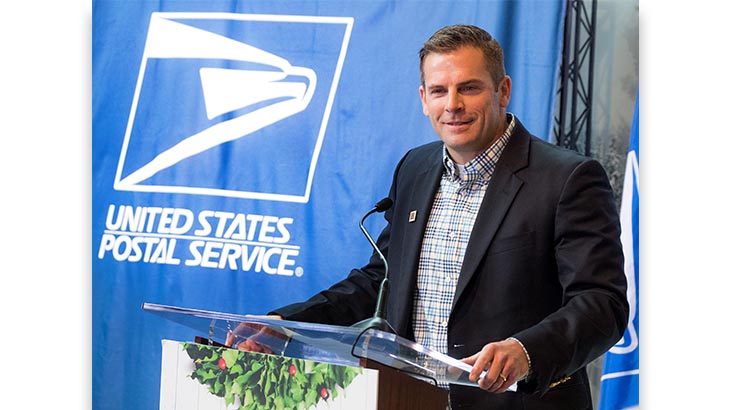 Coming off the Oct. 16 announcement of her upcoming retirement, Brennan received a warm welcome with applause and cheers from the crowd.

“I am honored to represent the more than 630,000 dedicated men and women of the United States Postal Service,” she said. “This holiday season, the Postal Service will deliver more than 13 billion cards and letters and 800 million packages to homes and businesses across the country.”

Brennan began her 33-year postal career as a letter carrier in Lancaster, Penn.

“When you’re a letter carrier, you notice a lot. You notice how people decorate their houses, and especially their doors,” Brennan said. “What you begin to realize is that the wreath is a form of expression. It’s certainly a way of expressing individuality.”

The wreath has been a staple on U.S. holiday postage stamps: The Postal Service’s very first holiday stamp featured a wreath, and it has issued nine different holiday wreath stamps in the past 57 years.

Brennan said the 2019 set is inspired by the holiday decorating traditions of early America; the wreaths are made with pine cones, dried flowers, dried berries and other items easily found in the winter months.

“As an artist, a designer, I don’t think there is a greater honor than having your artwork on a postage stamp,” Dowling said during the ceremony. “It still seems a bit surreal to me. … I am so appreciative, humbled, honored.”

Dowling lives in the colonial Old Town district in Alexandria, Va. About five years ago, an art director at the Postal Service, who also is a fellow Old Town resident, took notice of the handcrafted wreath of apples, berries and greenery that adorned her door. He contacted Dowling and asked if she’d like to submit a prototype for the stamp project, but she had to turn it down due to her position at the White House.

When she was approached again after she left the White House, she was thrilled. She began thinking of a collection of wreaths, made from natural materials that would be easily accessible to people all over the country, that would reflect the holiday tradition and embody the winter season.

Dowling and photographer Kevin Allen used her neighbor’s red door as the backdrop for two of the stamps. The wreaths on the white door were photographed at George Washington’s River Farm on the Potomac in Alexandria.

She is very thankful and pleased with the final stamp images.

“I love to make wreaths,” Dowling said. “They are a symbol of welcome, this idea that it’s a circle with no beginning, no end — a symbol of unity.”

Mahoney said the relationship began in 1911, when L.L. Bean mailed a four-page catalog to Maine hunting license holders who lived out of state, planting the seeds for a mail-order catalog company that would grow and flourish. Today L.L. Bean mails 150 million catalogs annually.

“We rely on the Postal Service to provide critical last-mile deliveries to some of our rural and hard-to-reach customers, so thank you for that,” he said.