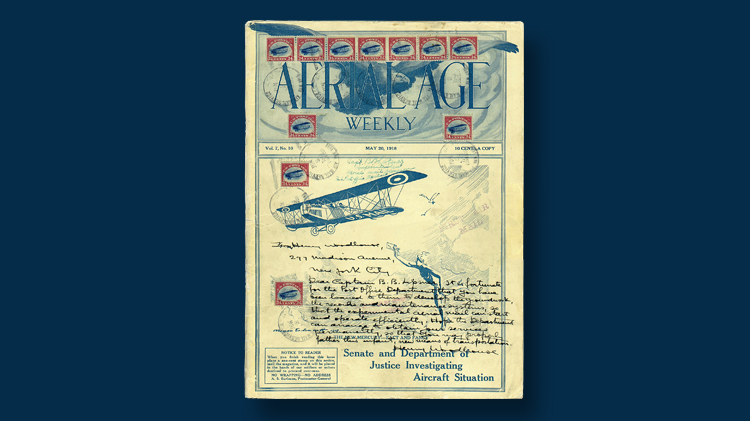 The cover of the May 20, 1918, issue of Aerial Age Weekly franked with 11 examples of the 24¢ Curtiss Jenny stamps (Scott C3). Image courtesy of the Smithsonian’s National Postal Museum.

The Smithsonian’s National Postal Museum in Washington, D.C., will open a new exhibit and host a first-day-of-issue ceremony and book launch on May 1.

The “Postmen of the Skies” exhibit celebrates the 100th anniversary of the first airmail flight.

“The exhibition, on view through May 27, 2019, invites visitors to step into the exciting and memorable stories of the airmail pilots whose pioneering flights set the stage for today’s advanced airmail system and commercial aviation,” the National Postal Museum said.

One of the objects on display is the May 20, 1918, issue of Aerial Age Weekly, franked with 11 examples of the United States 1918 24¢ Curtiss Jenny stamp (Scott C3). The magazine was sent by editor Henry Woodhouse to Capt. Benjamin Lipsner on June 3, 1918.

The publisher and editors of the Aerial Age Weekly were enthusiastic supporters of airmail, according to the museum.

Other items in the exhibit include goggles, leggings, a postal route map, and artifacts from pilots.

The blue United States Airmail forever stamp will have a ceremony at 11 a.m. May 1 at the museum. An article about this stamp appears on page 10 of this issue.

The first-day ceremony is free and open to the public.

Under an agreement with the Smithsonian’s National Postal Museum and the American Philatelic Society, the museum will host the launch of Stamp of the Century, a book about the famous Inverted Jenny error stamp.

The authors, Kellen Diamanti and Deborah Fisher, will be on hand from noon to 2 p.m. to talk with museum visitors and sign copies of their book, which will be for sale in the museum gift store.

The authors also will be part of the museum’s “History After Hours” program on May 2, from 6 p.m. to 8 p.m., for a book talk and signing.

Also, on May 1, the National Postal Museum will present two airmail-themed programs for the public: a scavenger hunt and game time.

The self-guided scavenger hunt will direct visitors to artifacts and exhibits throughout the museum that highlight the history of airmail in the United States, including “Postmen of the Skies” and “Airmail in America.”

The Postal Museum describes the airmail game time as a gallery activity that “will feature airmail-themed board games as part of the story of how airmail impacted American pop-culture. Visitors will be able to try their luck and test their skill at some of these vintage and reproduction games at this gallery experience.”