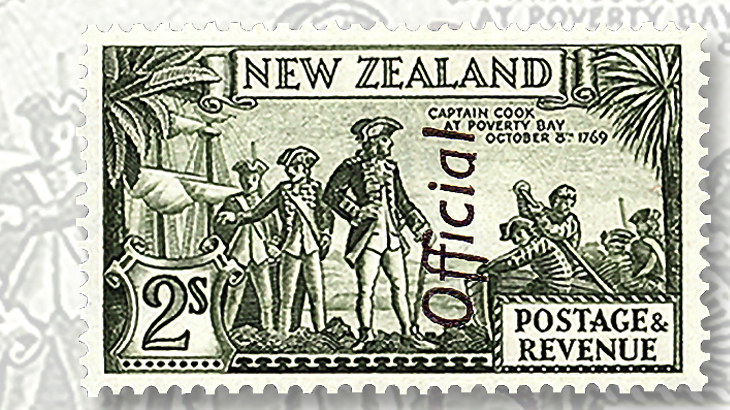 The New Zealand 1937 Captain Cook Landing at Poverty Bay Official stamp (Scott O71) is in demand and selling at or slightly above 2017 Scott Classic Specialized Catalogue of Stamps and Covers 1840-1940 value in unused hinged condition.

New Zealand is a former British colony and island nation in the southwestern Pacific Ocean. It lies about 900 miles east-southeast of Australia. The original inhabitants were Polynesians. Europeans began arriving in the 18th century.

The recent Disney hit Moana has sparked interest in all things Polynesian, but the market for New Zealand stamps remains generally quiet.

There are sparks of interest here and there. Capt. James Cook, that indefatigable explorer, arrived in New Zealand in 1769, the first European explorer to land there since Abel Tasman and his crew in 1642.

Cook mapped most of the coastline of the two main islands and paused long enough to brew beer for his crew, making him the father of the New Zealand brewing industry.

The 2017 Scott Classic Specialized Catalogue of Stamps and Covers 1840-1940 values the Official stamp in unused hinged condition at $24.

Evidently topical collectors who have already acquired the postage stamp are coming back around for a second bite of the apple with the Official stamp, which is in demand and selling at or slightly above Scott catalog value.