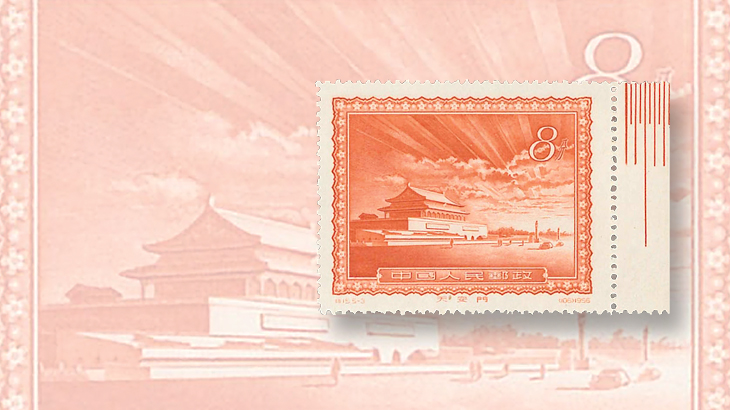 Interasia auctioned a number of modern rarities from the People’s Republic of China in a sale in July. This single of an unissued 1956 stamp with a design error (the sun rising at an impossible angle) brought almost double its estimate, selling for $252, 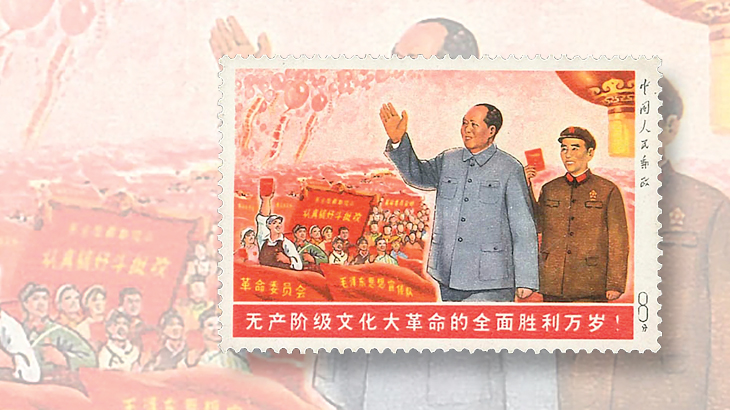 Considered one of the philatelic “Four Treasures of the Cultural Revolution,” this unreleased People’s Republic of China issue was represented with a mint example in Interasia’s July auction. It brought $111,000. 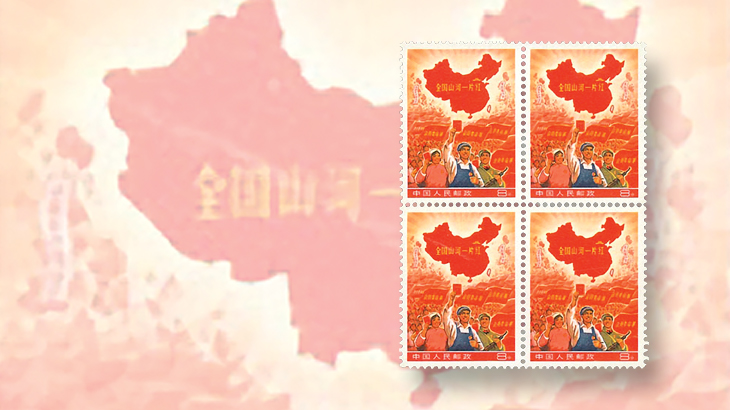 The entire nation was not red, despite the caption on the map on this issued but quickly withdrawn 1968 PRC stamp, offered as a rare block of four in Interasia’s July auction. The block sold for $445,000.
Previous
Next

Interasia Auctions in Hong Kong held an auction of China and Asian stamps and postal history on July 18-20.

The top realization was for a registered Large Dragon cover sent from Tientsin to Kassel, Germany, in 1886.

The Large Dragons were China’s first stamp issue, put out in 1878-1885 by the foreign-operated customs service that also handled mail delivery in and out of the Chinese treaty ports. The Large Dragons exist in a variety of types and papers.

The strip of three 1885 5-candareen chrome yellow stamps on thick paper (Scott 9a), with rough but intact perforations all around, represents one of just three uses on a registered cover known to have survived.

A dozen different postal markings document the letter’s travels from the customs office in Tientsin (modern-day Tianjin) to the one in Shanghai; then via the French post office in Shanghai, where it was further franked with a pair of French 25-centime yellow-on-straw stamps (France Scott 99); by ship to France and then overland to Germany. The journey took about six weeks.

Interasia described the cover as being “of the utmost rarity and highest exhibition calibre. Sans pareil.” It sold for the equivalent of a little over $560,000, including the 15 percent buyer’s commission that Interasia adds to all lots.

Modern rarities from the People’s Republic of China were well-represented in the Interasia July sale. A striking design error was the unissued 1956 8-fen red-orange Gate of Heavenly Peace stamp with sun’s rays in the sky (footnote after Scott 294; Yang S106). The stamp was withdrawn not for any offending inscription or political faux pas, but because of an astronomical flub: the sun is seen rising over Tiananmen Square from an impossible direction, leading some critics to suggest that the bright rays didn’t resemble sunshine so much as a nuclear blast.

The stamp, well-centered and without gum as produced, augmented by a sheet margin showing vertical lines, sold for $252,000, almost double its estimate.

Another famous unissued 8f PRC stamp, the design debacle showing a map inscribed “the entire nation is red” (Scott 999A), was offered in a rarely seen mint block of four.

The problem with this stamp, which was withdrawn after just a few hours on sale on the morning of Nov. 25, 1968, was the presence in the design of the conspicuously not-red island of Taiwan. Given Beijing’s refusal to recognize Taiwan as a separate country, this was an embarrassment – so embarrassing, in fact, that a different official reason had to be found for the stamp’s hasty withdrawal. The blame was placed on the absence from the design of a few tiny offshore islands.

The ever-popular 8f Year of the Golden Monkey stamp of 1980 (Scott 1586) was offered in a full mint sheet as well as numerous singles, blocks and covers.

Although some five million examples of this stamp were printed, and it contains no errors or other notoriety, its auspicious symbolism in Chinese astrology has made it an enduring collector favorite, and in a country with as many stamp collectors as China has, an issue of five million counts as scarce.

The Scott Standard catalog value for a mint single is $2,000. The value is given in italics, meaning it seldom trades on the market. The catalog also notes that “excellent forgeries exist” for the issue.

The Golden Monkey sheet sold for $192,500. A cacheted first-day cover bearing a margin-imprint single of the stamp with slightly tarnished gold ink sold for $1,400.