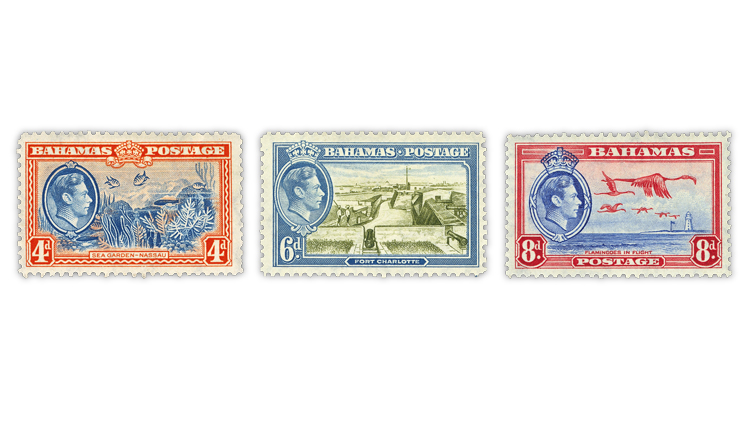 Jay Bigalke will present a talk Feb. 5 at the Collector’s Club in New York City on these three 1938 Bahamas stamps showing a sea garden, a fort and flamingos.

While flipping through British Commonwealth stamps at a stamp show in London in 2014, I came across a set from the Bahamas that caught my eye.

Little did I know then that I would focus on three pictorial stamps of the reign of King George VI: the 4-penny Sea Gardens, 6p Fort Charlotte and 8p Flamingos in Flight stamps issued July 1, 1938 (Bahamas Scott 106-108).

I initially was drawn to the colors of stamps and then to the stories behind them. For example, the 4p Sea Garden stamp is found used on commemorative covers sent from the seafloor via the Williamson photosphere, the world’s first undersea post office.

The other stamps have equally intriguing stories and carried some pretty interesting postal history from the islands to the world.

I was honored to receive an invitation last year to speak at the Collectors Club in New York City and will present my talk on the Bahamas 1938 King George VI pictorial stamps Wednesday, Feb. 5. My exhibit is scheduled to be open for viewing at 5 p.m., and my talk to begin at 6:30 p.m.

The event is open to the public, but space is limited. The club is located at 22 E. 35th St., New York, N.Y. Members of the club can also watch a recording of the video after the meeting.

Stamp societies band together for presentations