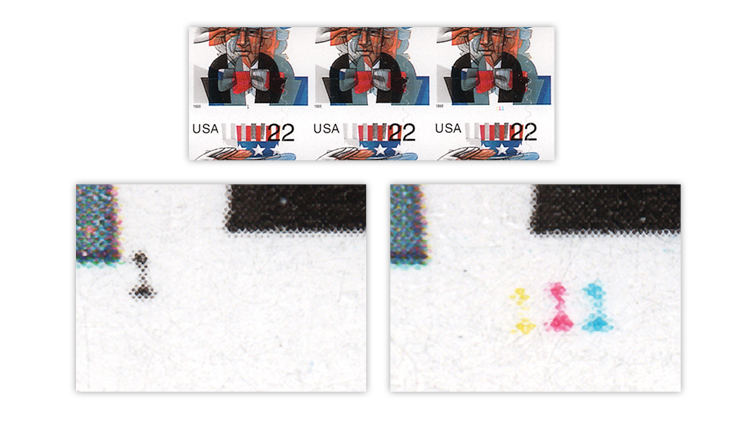 A freak strip of United States 22¢ Uncle Sam coil stamps (Scott 3263) was recently reported with the black plate number shifted to the left by two stamps causing the plate numbers to appear on two separate stamps. Close-ups are shown of all four plate num

Every once and a while, something turns up that at first glance looks like an error, but after close examination it turns out to be a freak.

“Errors include, but are not limited to, missing or wrong colors, wrong paper, wrong watermarks, inverted centers or frames on multicolor printing, inverted or missing surcharges or overprints, double impressions, missing perforations, unintentionally omitted tagging and others,” as defined in the Scott catalog. “Inconsistent or randomly appearing items, such as misperfs or color shifts, are classified as freaks.”

Sometimes those freaks can be quite interesting, which is the case with the 1998 United States 22¢ Uncle Sam coil stamps (Scott 3263) that were shared with Linn’s by collector Robert Thompson. These stamps were also highlighted in an article by John Greenwood in the December 2020 issue of Coil Line published by the Plate Number Coil Collectors Club.

The stamps have the die cutting shifted to the left, the full roll was cut wrong and includes the bottom of one stamp and the top of another below it, and the black ink is shifted heavily a full two stamps to the left.

While this isn’t an error, it is something noted previously in the Scott catalog for two different stamp issues of that same era, the 1990s, that also are examples of miscut coil stamps produced by the Bureau of Engraving and Printing.

A footnote under the 1996 32¢ Flag Over the Porch stamp (Scott 2915A) reads, “Plate number 9999 strips of No. 2915A are known with the brown plate number shifted one stamp to the right of the stamp with the other plate numbers. Such strips are scarce.”

A new footnote noting the existence of the 22¢ Uncle Sam coil stamp freak pictured here will likely be added to the 2022 edition of the Scott U.S. Specialized catalog.