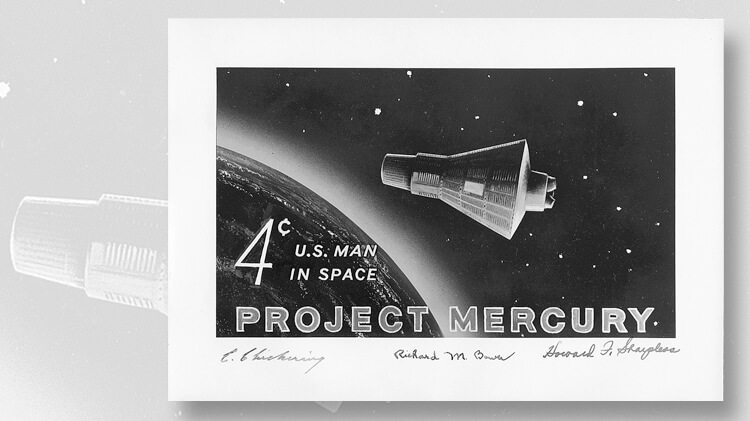 This photo essay of the 4¢ Project Mercury stamp is signed by the designer, picture engraver, and lettering engraver. 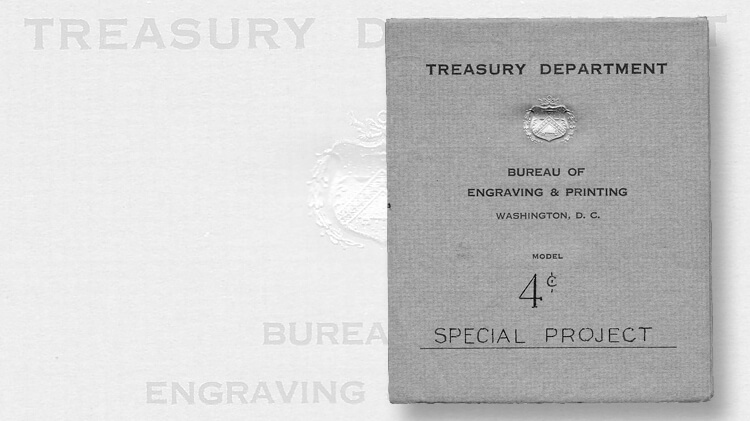 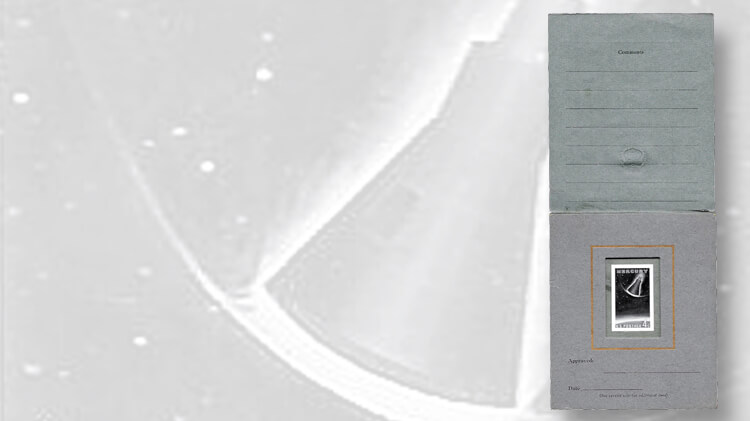 Inside the model folder, shown opened out, is a photographic reduction of what became the rejected model for the 4¢ Project Mercury stamp. 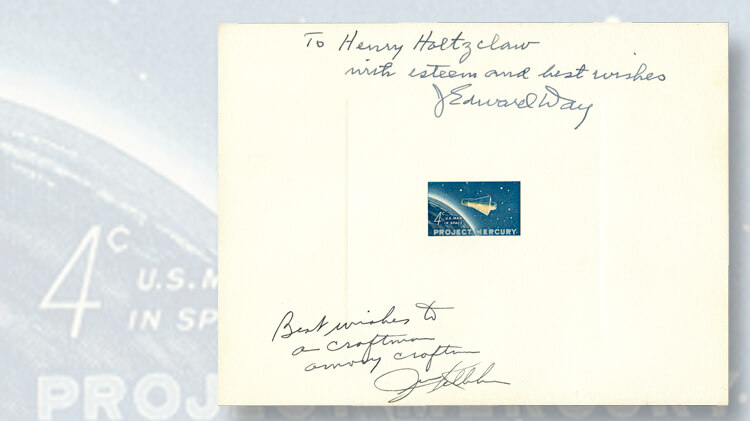 This large die proof of the 4¢ Project Mercury stamp is the most recent proof to find its way into private hands. 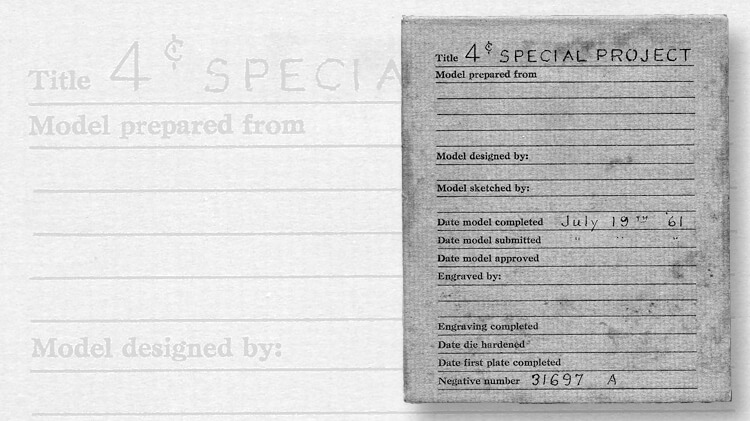 The back side of the model folder indicates that the 4¢ Project Mercury model was completed July 19, 1961.
Previous
Next

In the January 2005 issue of The United States Specialist (the monthly journal of the U.S. Stamp Society), Rodney Juell wrote about a discovery and purchase that he had made on eBay: a large die proof of the 4¢ Project Mercury stamp.

Illustrated nearby, this iconic proof, now listed in the Scott Specialized Catalogue of United States Stamps and Covers, became the most recent die proof produced to be in private hands.

Until it was listed, the last proof to escape the Bureau of Engraving and Printing was the 1961 4¢ Civil War Centennial stamp for Fort Sumter, which last sold in the 2006 W. Curtis Livingston sale.

Juell followed up his discovery article with an article in the February 2005 issue of the Specialist with an article about the signed photo essay pictured here that had accompanied the die proof.

It is a photo of the finished die proof, and it is signed by the designer, Charles R. Chickering; the picture engraver, Richard M. Bower; and the lettering engraver, Howard F. Sharpless.

In a speech given May 25, 1961, before a joint session of Congress, President Kennedy had laid out the challenge to put a man on the moon by the end of the decade. At that point in time, we had not even put a man into space. Nonetheless, Americans had become enamored with the space race between the United States and the Soviet Union.

Up until the midpoint of 1961, our country had only tested unmanned rockets, put up satellites, and had two successful suborbital flights in May (Alan B. Shepard, Jr.) and July (Gus Grissom).

On Feb. 20, 1962, Col. John Glenn became the first American to successfully orbit Earth. As Glenn’s capsule was being pulled from the water, the 4¢ Project Mercury stamps went on sale at post offices across the country. If Glenn’s mission had ended in catastrophic failure, we might never have seen the stamps. In all likelihood, they would have been destroyed.

The Project Mercury stamp was cloaked in secrecy from the moment it was conceived. Juell’s article recounted the complete step-by-step secrecy that surrounded the stamp from the time it was designed until it went on sale Feb. 20, 1962.

In August of this year, I had an opportunity to purchase a new piece of the Project Mercury puzzle that had surfaced. Shown nearby, it is a Treasury Department model folder. The folder came from the estate of a retired NASA employee of 50 years.

I have only seen five similar folders in private hands, four for the 1945 5¢ United Nations Conference stamp, and one for the 1954 4¢ Eagle airmail stamp.

The back side of the folder, also pictured, tells the story: “Date model completed July 19th ’61.” This was just three days before the last suborbital flight by Gus Grissom.

This would seem to indicate that the U.S. Post Office Department knew that it was only a matter of time before our country achieved orbital flight, and they wanted to be ready with a stamp to commemorate it. But they also knew of the risks associated with space flight — hence the secrecy.

Inside the folder, shown opened out, is a photographic reduction of the proposed artwork (or model) for the Project Mercury stamp.

It would be interesting to know just how this folder got from the Treasury Department to a senior employ at NASA. Because he is deceased, we will probably never know.

A sidebar: In 1962, I was in eighth grade at Alice L. Barnard Elementary School on the southwest side of Chicago. We had a post office located a few blocks (three busy intersections) from the school.

On Wednesday, Feb. 21, I was able to walk to that post office after school and buy a sheet of the new Project Mercury stamp for my mother to use on letters. I got to keep the plate block.

James E. Lee has been a full-time professional philatelist for over 25 years specializing in United States essays and proofs, postal history and fancy cancels. He may be reached via email at: jim@jameslee.com or through his website: www.jameslee.com.