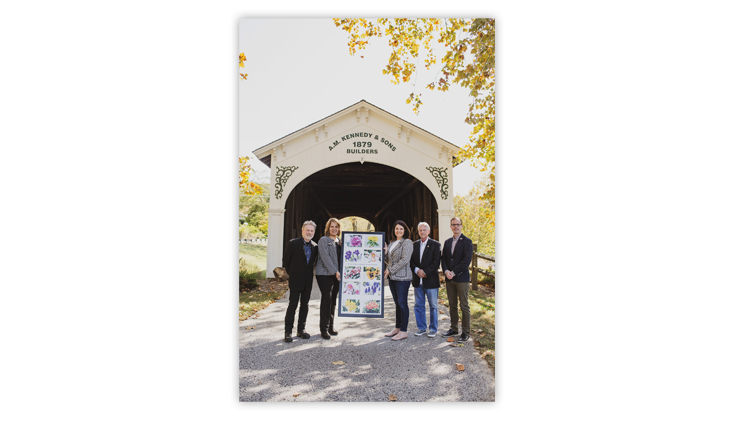 After the unveiling of the Snowy Beauty forever stamps Oct. 11 in Guilford, Ind., ceremony participants posed with the stamp poster in front of a covered bridge. Photograph by Catie Farrell.

On Oct. 11, and in the months leading up to that date, I assisted the Indiana district United States Postal Service team in putting together a first-day ceremony for the 10 new Snowy Beauty forever stamps.

Typically, definitive, or mail-use, stamps, don’t have USPS-headquarters-hosted ceremonies but at least have interesting postmarks. Since Guilford, Ind., is only about an hour from the office in Sidney, Ohio, I figured I would assist in putting an event together because one wasn’t being planned.

Luck had it that it didn’t snow. Instead, it was a beautiful day, and about 75 people showed up for the outdoor event at the Guilford Covered Bridge Park a short walk from the post office.

The many highlights included meeting the first lady of Indiana Janet Holcomb and the Snowy Beauty stamp illustrator Gregory Manchess. Both helped unveil the stamps and signed autographs after.

Another highlight was meeting some Linn’s subscribers and stamp collectors. One collector lived in the small town of Guilford and brought her two children to the event. I was thrilled that she expressed a renewed interest in stamp collecting because of the event and said she was happy to be in attendance.

Local newspapers covered the event both before and after, which gave even more positive publicity for stamp collecting.

I am looking forward to more opportunities like this happening in the future.