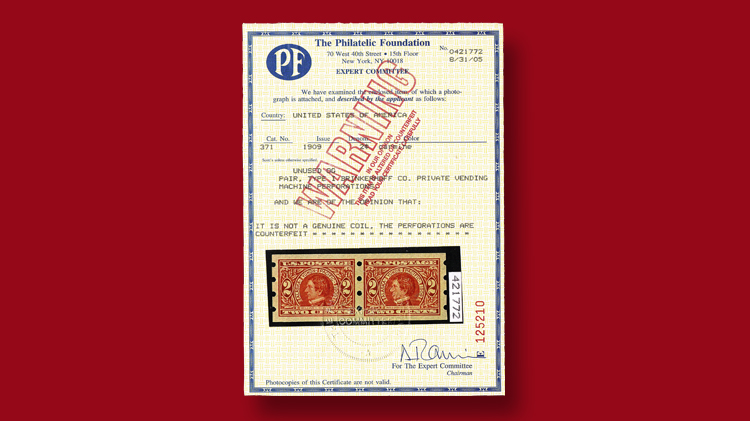 Created from imperforate William H. Seward sheet stamps (Scott 371), this purported private vending machine pair was declared to be a fake by the Philatelic Foundation. 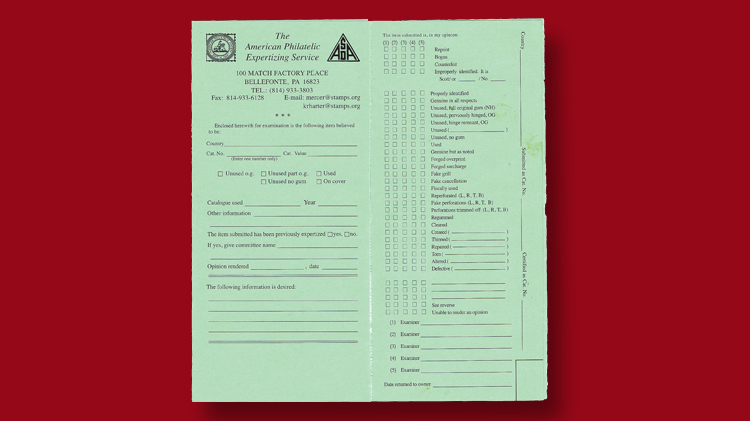 The American Philatelic Expertizing Service (APEX) experts use this checklist when examining a stamp or cover. Other expertizing groups use something similar.
Previous
Next

A provocative letter sent anonymously by a Linn’s reader in or near Philadelphia (per the cancellation on the envelope) poses several questions about expertization that beg for a response.

The first question — actually three in one — presumes dishonest intentions. While such intentions may exist, I do not believe they are pervasive.

Q: I saw an auction lot which had several stamps which received bad certificates. A dealer bought this lot. Would the dealer sell these stamps with the bad certificates? Or remove the certificates and misrepresent the stamps as genuine? What is the ethics of the auctioneer in selling the lot with bad certificates?

A: I see nothing wrong with an auctioneer or any other dealer selling properly described stamps with or without certificates. A bad certificate from the Philatelic Foundation is illustrated nearby. Ethical dealers — the great majority in my experience (certainly those who note their membership in the American Stamp Dealers Association and/or the American Philatelic Society) — would not strip off bad certificates and sell the stamps as genuine.

Customers dealing with those few dealers who might do this have a remedy. Regarding any stamp that you have doubts about, tell the dealer that your purchase is conditional upon the stamp receiving a good certificate. Make it clear that if it fails to get one, you will return the stamp. The dealer also should agree to cover the cost of the bad certificate.

If the response you receive to this request is sputtering or argument, don’t buy the stamp.

Q: Does the term State College “Mafia” ring a bell with you?

A: I can only guess what the implication is here, but it certainly isn’t positive. My answer is an unequivocal NO. I speak as one who has been involved as a board member of the American Philatelic Society for 16 years (1987-2003) and since then, as an active participant in several areas of APS governance and service to members. Also, I have been an expertizer on the roster of the American Philatelic Expertizing Service (APEX) since 1986.

There are those who toss around the term “elitism” when referring to APS leadership. This may relate to the question, but I have seen little sign of it. By definition, the ruling class is an elite group, but any member can be involved in APS activities and services, or run for office and thus join the elite. There are never enough volunteers willing to roll up their shirtsleeves and get to work.

However, if the letter writer is hinting at some sort of cabal that influences opinions on patients (stamps and covers being expertized) from society headquarters in Bellefonte, Pa. (not State College), that is pure fiction.

The APEX experts live all over the country. We render opinions on the patients not on their owners, who are for the most part unidentifiable from the information we receive.

As experts, we don’t consult with each other to fix opinions and only rarely to argue the merits of a patient. Rather, we use the report form, shown nearby, to register our opinions in sequence. It is then up to the professional staff at APS headquarters to translate those opinions to language on the certificate itself.

A long-serving, ethical staff of two performs this work, and they do it without input or influence from senior staff or the APS board.

Not only is there no mafia, there is no possibility of one. If there were, I would have stumbled over it a long time ago.

All this said, there may be opinions on which reasonable people can disagree. Also, there may be the occasional opinion that is proven wrong. After all, expertizers are only human. But this in no way supports the concept that there is some sort of mafia-like enterprise manipulating opinions.

Q: Is there a glossary of terms used in writing up the certificates?

A: There is. It’s called a dictionary. Well, enough levity. It is the expertizers’ opinions that guide the preparation of the certificates, and there is no list of approved terms for expertizers. There are, however, standard categories used to describe findings in the form of categories of problem, with check boxes as shown here on the aforementioned APEX sample. Other expertizing houses use something similar.

Opinions are worthless if not precise, so expertizers can and often do take advantage of the back of the form to make additional notes to support their findings, or to express doubts about findings by the other expertizers.

As mentioned earlier, the Bellefonte APEX staff of two have the task of translating the input from expertizers into what will be noted on the certificate. Because it is only two people, there will be a high degree of consistency in the language used. Again, the same is true of other expertizing groups.

Questions regarding expertizing or anything else related to stamps and the stamp hobby are always welcome. Write to me, John Hotchner, via email or at Box 1125, Falls Church, VA 22041-0125.