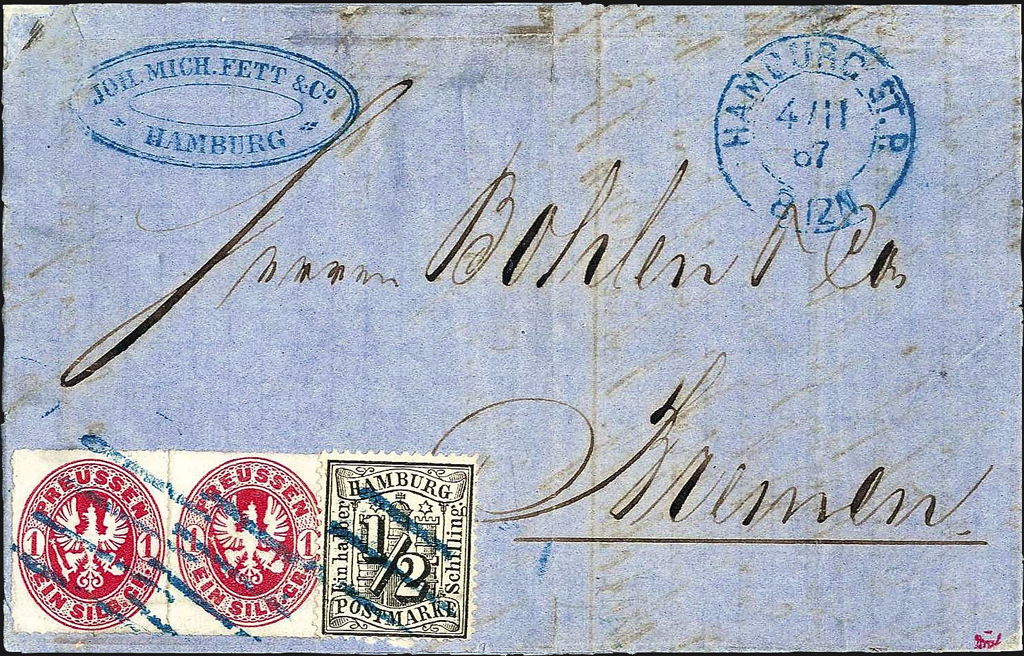 The Sept. 11-12 auction by Wurttembergisches Auktionshaus in Stuttgart, Germany, features worldwide material and classic Germany. This 1867 mixed franking cover includes stamps of Hamburg and Prussia on a blue folded letter.

A striking 1867 mixed-franking cover combining stamps from Hamburg and Prussia is featured in the upcoming auction by Wurttembergisches Auktions­haus of Stuttgart, Germany.

The Sept. 11-12 auction is presented in four separate catalogs that encompass German States, German empire, German offices abroad, plus Europe and other worldwide stamps and covers.

A top item among the auction’s German States material is the unusual mixed-franking cover that corresponds to the 3-schilling postage for a letter mailed from Hamburg to Bremen.

It is franked at lower left with a pair of the Prussia rouletted 1-silbergroschen rose stamps and a single of the perforated 1864 Hamburg ½-schilling black stamp.

The stamps are struck with a simple multiple-bar blue cancel of the Hamburg municipal post office; the cover is also marked with a double-ring “Hamburg St. P.” postmark with a “4/11 67” date. At upper left is the handstamped oval corner card of Joh. Mich. Fett & Co. of Hamburg.

Wurttembergisches Auktionshaus explains that mixed-franking letters of Hamburg with stamps of other old German states are “very great rarities.”

The example offered in this sale is accompanied by certificates of authentication from Wolfgang Jakubek (1983) and Gertraud Lange (2014), and identified as ex-Kuphal collection. It is listed with an opening price of €12,000 (approximately $13,400 in mid-August).

The worldwide offerings include a section for Switzerland, with an attractive used example of the 1843 4-rappen black Zurich local stamp with the red vertical line underprint. The stamp is struck at top with a clean red Zurich rosette postmark, and is accompanied by a 1990 photo certificate from Emil Rellstab.

The small number of United States issues includes an unusual find: a variety of the Hawaiian 1865 2¢ dark blue Numeral issue on white paper (Scott 26) known as the “broken toe” type.

This is the Hawaiian issue with “Interisland” printed up the left margin and “Uku Leta” printed across the upper margin. A lower-left segment of the large numeral of value in the center of the stamp is missing on this variety.

The unused stamp is described as “all around extremely fine with wide margins.”

The Hawaiian variety is offered in this auction with a starting price of €1,200 (approximately $1,350).

Details of the auction with lot descriptions and illustrations are available online at Wurttembergisches Auktionshaus. Bids can be placed online as well.