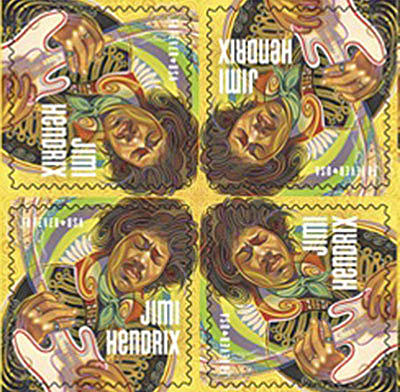 A psychedelic approach is being used for the design of the new United States Jimi Hendrix commemorative forever stamp.

The stamp is the fourth entry in the Music Icons series and will be issued March 13 in Austin, Texas.

U.S. Postal Service officials announced the stamp subject Feb. 18 but said the artwork would not be revealed until March 13.

The stamp illustration was created by artist Rudy Gutierrez.

According to the Postal Service, “His choice of colors and designs introduced elements of movement and rhythm with an almost musical flow, paying homage to the 1960s without directly imitating the era’s art.”

The pane of 16 stamps will resemble previous Music Icons issues, but the arrangement of the individual stamps is different.

A block of four of the Hendrix stamp, cropped from a full pane, is shown here to display the unusual kaleidoscope layout.

Four such blocks comprise the pane, with pane selvage and backing that resembles a 45rpm record.
Banknote Corporation of America for Sennett Security Products printed a quantity of 60 million Jimi Hendrix stamps in panes of 16.

Press sheets, both with and without the die cuts that normally separate individual stamps, are available for the Jimi Hendrix issue. Each press sheet consists of nine panes and sells for $70.56. A total of 2,500 press sheets of each type were printed.

The first-day ceremony for the Jimi Hendrix stamp is taking place at the South By Southwest (SXSW) music festival in Austin on “the evening of Thursday, March 13th on the Outdoor Stage at Butler Park,” according to the festival website.

Technical details for the Jimi Hendrix stamp and first-day cancel ordering information are listed in the box on this page.

First-day cancel ordering information
Collectors requesting first-day cancels are encouraged to purchase their own stamps and affix them to envelopes. The first-day cover envelopes should be addressed for return (a removable label may be used), and mailed in a larger envelope addressed to Jimi Hendrix Station, Postmaster, 8225 Cross Park Drive, Austin, TX 78710-9998. Requests for first-day cancels must be postmarked by May 12.
The Postal Service’s uncacheted first-day cover for the Jimi Hendrix stamp is USPS item No. 588016 at 93¢. USPS order numbers for stamps and FDCs also appear in Linn’s 2014 U.S. Stamp Program.