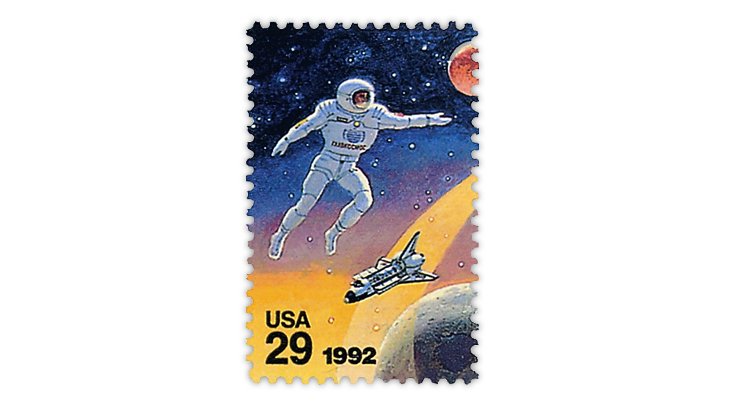 The cartoon caption contest image for June is the United States 1992 29¢ Space Accomplishments stamp showing a Russian cosmonaut and a U.S. space shuttle. Entries must be received by June 24 for a chance to win a prize.

In 1992, the United States Postal Service issued a block of four se-tenant (side-by-side) 29¢ stamps (Scott 2634a) to commemorate space accomplishments. It was a joint issue with the Russian Federation.

In the wake of Russia’s invasion of Ukraine, relationships between the United States and Russia have reached new lows, but cooperation in the space program remains as the single bright spot between the two countries.

It might not last as Ukraine-related events unfold, but for the present, a level of peaceful cooperation continues. Still, one wonders what Russian cosmonauts are thinking about where the future might lead.

To give Linn’s readers a chance to reflect upon that concept, the cartoon caption contest stamp for June comes from the upper left (Scott 2631) of the block of four. The design shows a Russian cosmonaut and a U.S. space shuttle.

You are invited to put yourself in the cosmonaut’s space suit and to come up with one or more lines on the subject of continuing space cooperation, the politics of the relationship as reflected on stamps, stamp collecting, how the Ukraine war might play out, or whatever else you might wish to comment on from the cosmonaut’s viewpoint.

Entries must reach me no later than June 24.

Elvis in the spotlight for May cartoon caption contest