Put yourself in a gingerbread house for the December U.S. Stamp Notes cartoon contest 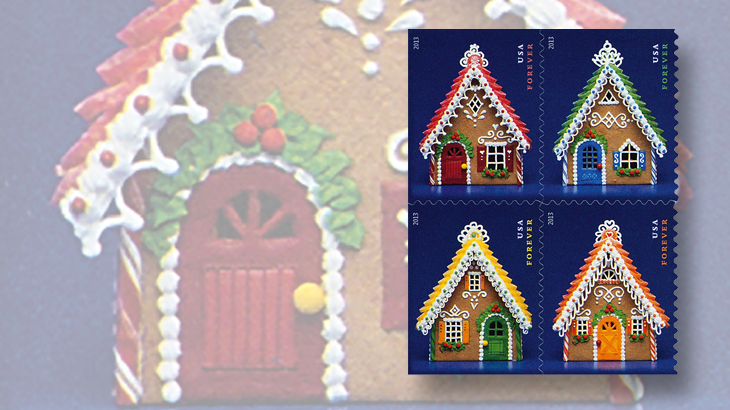 Can you identify all the differences in the four similar Christmas Gingerbread House forever stamps issued by the United States Postal Service in 2013? 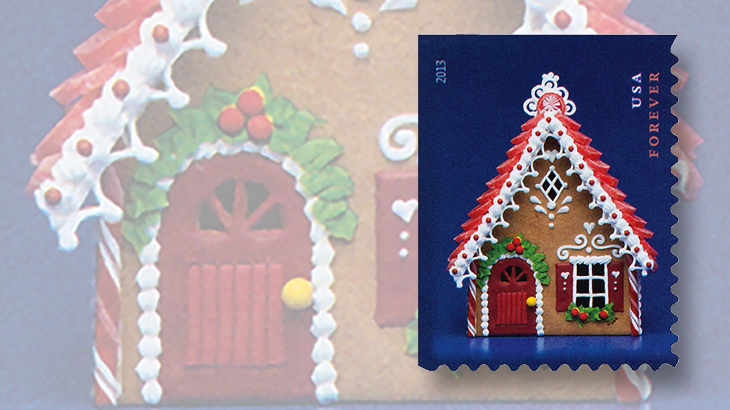 The cartoon contest stamp for December is one of the Christmas Gingerbread House stamps from the block of four issued in 2013. Picture one of the characters from Hansel and Gretel, or anyone else inside the house, and tell me what you might be thinking or saying. The rules to enter the contest are in the accompanying article. Entries must be received by Dec. 26 for a chance to win a prize.
Previous
Next

Gingerbread dates back more than 1,000 years. Over the centuries, gingerbread was made in different shapes, eventually developing into an art form with the introduction of gingerbread houses in 16th-century Germany.

Later, they were decorated for the Christmas season and became a staple of end-of-the-year celebrating.

Gingerbread houses were an inevitable central design for United States Christmas stamps. Their time came in 2013, when four forever stamps were issued with different versions of the same basic gingerbread house (Scott 4817-4820).

The color schemes of the houses and the placement and design of the doors and windows differ on each stamp.

The stamp with the red door (Scott 4817) is being used for the December cartoon contest.

So, who is in the gingerbread house? It could be anyone from the postmaster general to your favorite football player to a stamp collector. Or perhaps you are in the house.

Another possibility is basing your caption on the fairy tale Hansel and Gretel, in which the Brothers Grimm took an old folk story with several versions, and made it into an entertaining, if somewhat scary, narrative involving hungry witches and children.

In spite of, or maybe because of, the fearful aspect, the story by Jacob and Wilhelm Grimm has been made into an opera, a movie, and innumerable illustrated books.

So, your challenge is to put one of the Grimm characters, or anyone else of your choosing in the gingerbread house on the stamp and tell me what they are saying or thinking. The subject can be from the fairy tale, philately, politics, sports, or whatever else comes to mind.

Put your entry (or entries) on a postcard if possible and send it to me John Hotchner, Cartoon Contest, Box 1125, Falls Church, VA, 22041-0125, or e-mail it to jmhstamp@verizon.net. Be sure to include your mailing address.

To be considered for the prizes, entries must reach me not later than December 26. Why not enter now while you’re thinking about it?