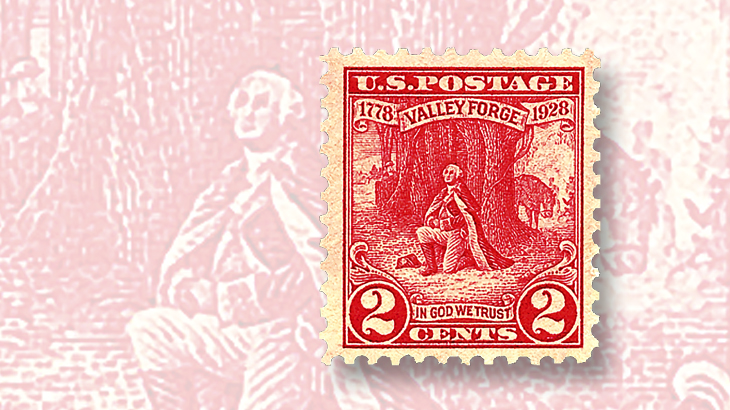 The cartoon caption contest stamp for March is the 1928 stamp showing George Washington at prayer at Valley Forge. Put yourself in his cloak and tell me what he might be thinking, saying, or praying about as he observes today’s current events. There will be a prize for the best philatelic and nonphilatelic lines. The rules to enter the contest are in the accompanying article. Entries must be received by March 25 for a chance to win a prize.

“Washington at Prayer” is how the Scott catalog describes the design of the 1928 2¢ stamp commemorating the 150th anniversary of Washington’s encampment at Valley Forge, Pa. (Scott 645).

I would posit that such an image would likely be ineligible for picturing on a U.S. stamp today; unless the U.S. Postal Service was willing to risk lawsuits.

And yet, it is a compelling illustration, one that calls to mind the deep, widespread, and very public expressions of faith of yesteryear. With some trepidation, I want to use it for the cartoon caption contest for March.

I selected this stamp not because it is inherently funny but because I suspect there is a lot of praying going on these days related to the current presidential festivities, the changes being wrought by the USPS that impact stamp collecting, our national security, and more.

This gives you the chance to wrap George Washington’s cloak about you and to cogitate upon what he might be thinking, saying, or praying about as he observes the current events we are dealing with.

To be considered for the prizes, entries must reach me not later than March 25.