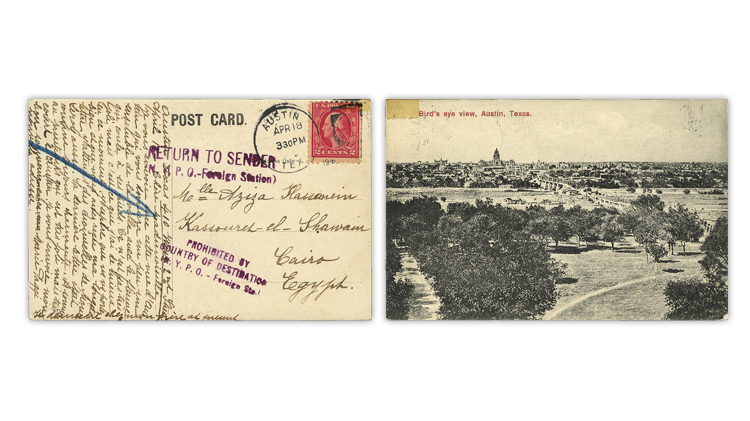 This postcard mailed from Austin, Texas, to Cairo, Egypt, on April 18, 1916, has markings that show it was refused for transmission as “prohibited by country of destination.” The mystery as to why may finally be solved.

The auxiliary markings on the postcard shown here in Figure 1 have puzzled me for more than six years, ever since I pictured it in my column in the June 4, 2012, issue of Linn’s.

It never made to Egypt, though, traveling only as far as New York City, the sorting point for international mail. The foreign station of the NewYork post office applied the two hand-stamped auxiliary markings: “Return to Sender” and “Prohibited by country of destination.”

In the aforementioned 2012 column, I asked for the help of Linn’s readers to explain why it was rejected.

Unlike most of my questions to Linn’s readers, there was no conclusive answer, although several readers had interesting guesses. So I put the card back into my unsolved mysteries folder. Recently, though, I stumbled across a write-up about a related decree that reads as follows:

“By virtue of a decision of the Council of Ministers of November 14, 1900, an Imperial decree by the Sublime Porte forbade the introduction into, or sale in, the Ottoman Empire, of postcards bearing the names of God and his prophet Mohammed, any pictures of the Kaaba or anything relating to Mecca and other Mussulman religious buildings or ceremonies, as well as portraits of Mohammedan women. As a consequence of this edict, the police in Constantinople seized all such cards found in shops and in the possession of salesmen of Turkish nationality, and bought up all they could find in the possession of foreigners.

“This ban, forced on the Turkish people because of deep religious sentiments, certainly struck a blow at a most remunerative trade, for by far the most popular cards purchased by tourists were those showing the mosques and religious ceremonies and functions, as well as the interesting souvenirs of Turkish women dressed in their distinctive Oriental costume. In an article written at the time on this subject, the belief was expressed that such cards would become scarce and desirable as collectors’ items.”

Linn’s reader Charles Bogart wrote in 2012 that the Ottoman Army had conquered most of Egypt east of the Suez Canal and were not cleared from the area by the British until 1918. He also noted that the postcard is addressed to an area then occupied by the Ottoman Army. This gives us a connection to the Ottoman edict.

However, the postcard shows what is labeled as a “Bird’s eye view of Austin, Texas,” hardly something that would comport with the prohibitions of the edict. What could possibly be offensive?

My candidate would be the long message in French on the address side of the card. The content of the message, however, has no military or religious meaning. Yet, a clerk in the foreign station of the New York post office might not have known that, only that there was a possibility that the message could be offensive.

There being no appeal from a finding of the post office, I think the clerk rejected the postcard out of an abundance of caution. Why take a chance?

At the time, the NewYork post office would have known that at best Egypt was complicated.

The post office had likely seen mail returned as undeliverable, or not in compliance with the censorship or other prevailing rules. The easy thing to do was simply reject what the clerk had reason to believe would not pass muster at the delivery end.

My thanks to the following Linn’s readers, in addition to Bogart, who responded in 2012 with facts or theories: Ben Beede, Charles Hewitt, Hans Kremer, Michael Lubrano, Duff Malkin and Larry Weiss.