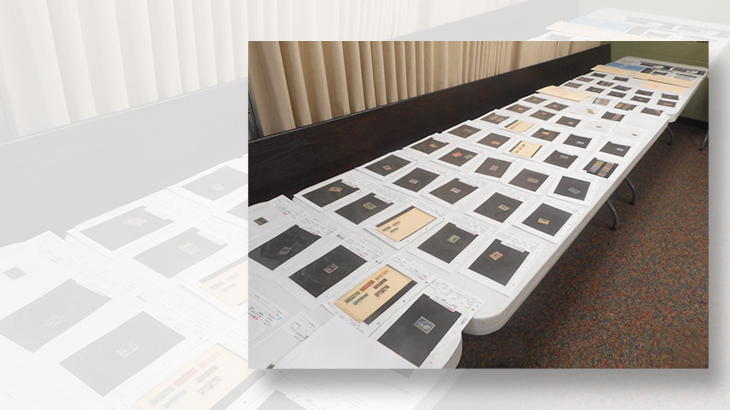 Single stamps and sets prepared as auction lots for the April 22 Stamp Out Cancer auction, an annual event organized by the Quad City Stamp Club to benefit the American Cancer Society.

An enthusiastic group of live bidders combined with some 40 mail and online bidders to raise more than $9,200 for the American Cancer Society’s Quad Cities Chapter in Iowa and Illinois.

Since the club’s charity auctions began, they have raised more than $280,000 for cancer research.

This year’s sale was a larger-than-average event, with 630 lots of United States and worldwide stamps and postal history hammered down between 1 p.m. and 5 p.m. in the basement of Faith Lutheran Church in Moline, Ill.

One of the more interesting lots was a box filled with hundreds of U.S. souvenir sheets dating from the 1930s, including dozens of examples of the same sheets. All were post office fresh with perfect gum.

The lot had a face value of almost $220 that could be used for postage today, but a lucky bidder took it home for just $130.

One trademark of the Stamp Out Cancer auction is how often desirable material goes for bargain prices, regardless if the lots consist of mint or used stamps, singles, plate blocks, full panes, or postal history.

Two auctions are conducted simultaneously during this event, with a minimum of confusion.

Worldwide material is offered on one side of the room, while U.S. items are auctioned on the other side. Some bidders sit in the middle so they can participate on both sides, often with great success.

Mail and online bids came in from a dozen states. Thirteen of these bidders were successful, meaning their lots will be delivered by the U.S. Postal Service.

All proceeds will be given to American Cancer Society representatives at the club’s June 8 meeting at Saint Mary’s Catholic Church, 410 10th St., in Moline.