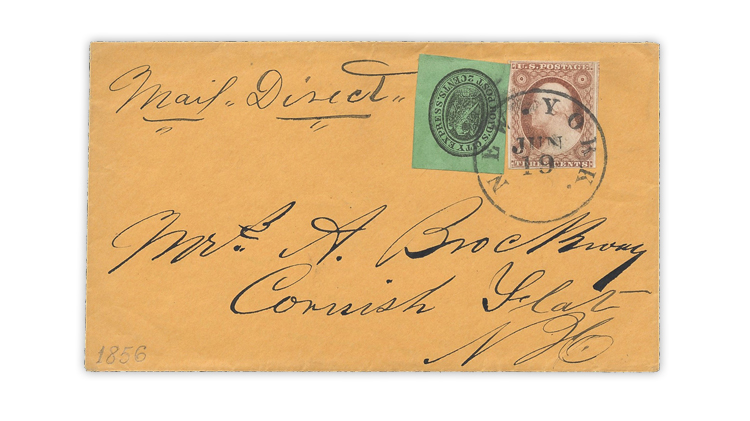 An array of name collections offering a wide variety of postal history will be up for bids during H.R. Harmer’s Oct. 26-27 auction series at the firm’s gallery in Rockefeller Center in New York City.

“For about six months in 1860 the post was suspended. It was then sold to William and Mary Blackham who resumed operation on Dec. 24, 1860.

Among the many eye-catching covers in the Bowman collection is a combination franking featuring an 1855 2¢ black Boyd’s City Express Post local stamp on olive green paper (Scott 20L11) and a U.S. 1851 3¢ dull red George Washington stamp (11).

Both stamps are neatly tied to the envelope by a crisp strike of a June 19 New York City circular datestamp. Docketing in the bottom left corner indicates the cover was mailed in 1856.

H.R. Harmer describes the cover as “a wonderful to-the-mails use of one of the scarcer Boyd’s issues which was in use for only about one year.”

Scott 20L11 on cover and tied by a handstamp is valued at $350 in the Scott U.S. Specialized catalog. The value is italicized to indicate an item that trades infrequently in the philatelic marketplace.

Separate catalogs for each of the auctions are posted on the H.R. Harmer website, and online bidding options are available after registering with H.R. Harmer.