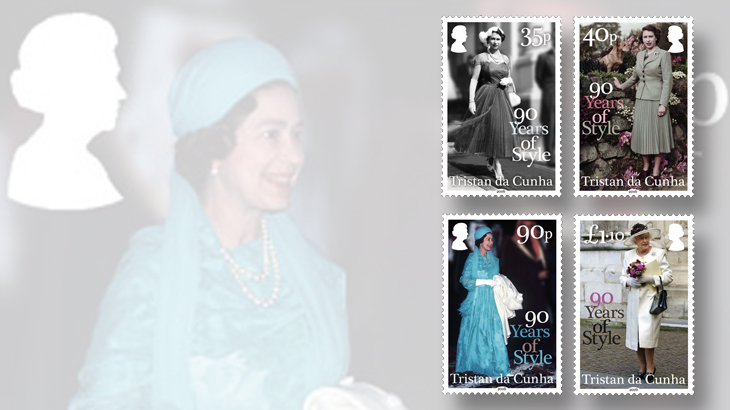 Tristan da Cunha celebrated the 90th birthday of Queen Elizabeth II on a set of stamps April 21, part of a multination series called “90 Years of Style.”

Back in the late 1960s whenever there was occasion for a big to-do at Buckingham Palace, it was a simple matter for me to hop onto my bicycle and peddle my way over from Knightsbridge to take in the show. I'm not talking the basic changing of the guard shows here — although they in themselves are worth a look — but I'm talking big events, such as royal births, marriages, and birthdays.

Closing my eyes, I can still see Queen Elizabeth II riding in her royal carriage, followed by her royal entourage and her Queen's Guards on horseback. The ceremonial pomp and bright colors were truly breathtaking. And how young and beautiful she looked in person. With a sparkling crown on her head, she was much prettier than the way she appeared on the Wilding stamp issues I was religiously hinging into my Stanley Gibbons Windsor album. (The Machin series, which would debut in 1967, did her way more justice).

How time flies! On April 21, after being proclaimed queen in 1952 (making her the longest-reigning queen regnant in history), Queen Elizabeth celebrated her 90th birthday. Still quite dapper, the queen at 90 clearly still embodies all that is regal and proper.

Now that I am back home in the United States, there are no more bike rides over to the palace (and at my age, these would now be taxi rides) so I am fortunate to be able to celebrate the occasion vicariously through postage stamps.

In addition to the United Kingdom, many countries once or currently associated with Great Britain are issuing stamps to commemorate this milestone event. One of these is Tristan da Cunha, which issued a set of four stamps and a souvenir sheet on the queen's birthday.

Part of a multination series called “90 Years of Style,” these terrific stamps highlight various stages of the queen's life and come in denominations of 35 pence, 40p, 90p and £1.10. The single stamp in the souvenir sheet is denominated £3.

The selvage area of the souvenir sheet pictures the queen visiting Gloucester in 2009, and the stamp depicts her at the 1962 Royal Variety Performance in London.

The stamps measure 28.45 millimeters by 42.58mm. They were designed by Bee Design, and printed by BDT International Security Printing by lithography in panes of 10.