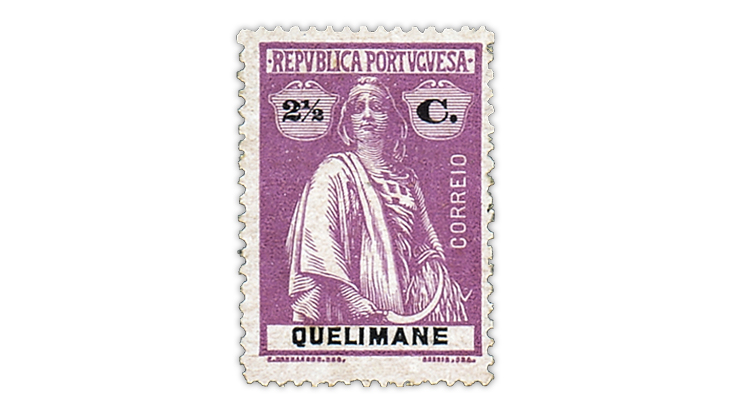 All stamps of Quelimane listed in the Scott Classic Specialized Catalogue of Stamps and Covers 1840-1940 are a good buy in fine-very fine grade and unused hinged condition at 80 percent to 100 percent of catalog value.

Today Quelimane is the largest city and the capital of the Zambezia province of Mozambique. One of the first sub-Saharan settlements on the southeast coast of Africa, it has been an important Indian Ocean seaport for hundreds of years.

Portugal began colonizing the area in the early 1500s and founded a trading station at Quelimane in 1544. It later became an important center of the slave trade.

Quelimane is the only stamp-issuing entity that begins with the letter Q listed in the Scott Classic Specialized Catalogue of Stamps and Covers 1840-1940.

Quelimane issued stamps as a Portuguese colony in 1913-14. Stamps of Quelimane were succeeded by stamps of Mozambique.

We previously tipped the 1913 overprinted set in the Stamp Market Tips column in the Oct. 31, 2016, issue of Linn’s. All three sets are a good buy in fine-very fine grade and unused hinged condition at 80 percent to 100 percent of Scott catalog value. Most of the stamps will have hinge remnants but that doesn’t detract from the value.

Covers are scarce, worth hundreds to thousands of dollars depending on usage and quality.

All three sets provide a challenging, but above all, fun collecting quest.