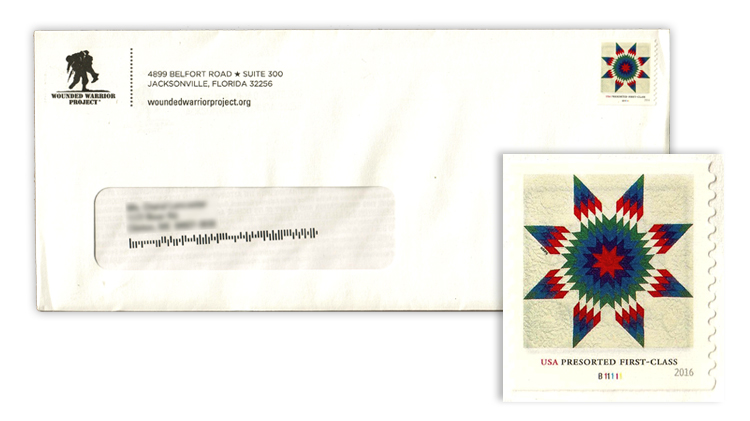 When the two Star Quilts coil stamps were issued in July 2016, the plate number appeared on the stamp listed in the Scott catalog as 5098. In late November 2021, a collector in Maine discovered a plate number on the other Star Quilts stamp (5099) on this

United States stamp collectors have something new to look for on a 2016 stamp issue that went back to press in 2021.

Collector Robert Washburn of Maine reported a new find related to the plate number on the Star Quilts coil stamps in an article published in the January 2022 issue of Coil Line, the journal of the Plate Number Coil Collectors Club.

The find was on the cover shown nearby, which was sent by the Wounded Warrior Project in Jacksonville, Fla., to an address in Maine.

The stamp on the cover is the nondenominated (25¢) Quilt stamp (Scott 5099) with plate number B11111. The stamp stood out to Washburn because up until this cover landed in his hands, the plate number appeared on the other stamp in the coil (5098).

USPS spokeswoman Sara Martin told Linn’s the reason for the change: “New coiling equipment was used for the July 2021 reprint of Star Quilts 10K coils which resulted in a layout change.”

Linn’s also received a similar report from a collector who purchased a coil roll of 3,000 of the 2021 reprinted version from a Virginia post office in early January.

In regards to the Scott catalog listings, the plate number on Scott 5099 will be noted with an unlettered minor in the 2023 Scott Specialized Catalogue of United States Stamps and Covers. It will not receive a separate major number or minor listing.

In mid-January, USPS spokesman Jim McKean told Linn’s that both Star Quilts coils were still available for purchase from Stamp Fulfillment Services. The item numbers for full coils of 3,000 and 10,000 are 781004 and 799904, respectively.

However because it cannot be guaranteed that collectors will receive the new variety when ordering, it looks like the easiest option for those looking to obtain a plate number strip of the new variety will be to purchase it on the secondary market.

For more information on the Plate Number Coil Collectors Club, visit its website.