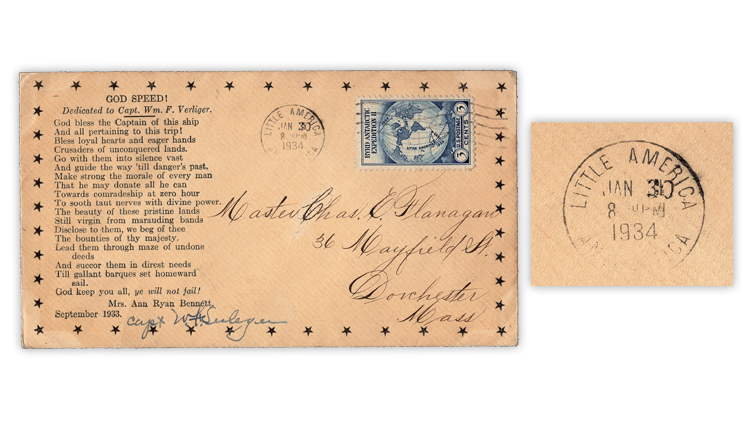 The first day of use of the Little America, Antarctica, cancel was supposed to be Jan. 30, 1934, but in error, most covers were canceled Jan. 31. The Antarctic expedition conducted a failed experiment to put a “0” over the “1” date in the cancel.

When a cancellation is altered, there is often a story to go along with it. That’s true of the Little America cover illustrated here.

Little America was the name of Adm. Richard Byrd’s Antarctic exploration base. For Byrd’s second Antarctic expedition of 1933-35, the United States Post Office Department established its first Antarctic post office at Little America, and souvenir covers, such as the one shown in Figure 1, were postmarked there. The first day of use of the Little America cancellation was supposed to be Jan. 30, 1934.

I asked premier Arctic/Antarctic exploration expert Hal Vogel if he could tell me why the cancel seemed to have been altered on the cover, and I can’t do better than pass along his response:

“The ‘0’ in the circular date stamp (‘30’) is one of the few surviving examples of a ‘secret’ attempt to ‘correct’ the misapplication of “31” on the machine-cancelled mail. It’s a long story, but the expedition’s mail clerk changed the date as the days passed from 30 to 31 January. He should have left it as 30 as the expedition and Post Office notices had promised a first day of use cancellation to subscribers. The hand cancellers said 30 January and that was not changed. But the changed machine cancel was a problem.

“Mail cancelled with 31 January had to be dealt with, so mail of expedition members with that date was used for an experiment: putting a ‘0’ over the ‘1’ in ‘31’. The experiment did not go well, and they just owned up to the mistake and took the PR fallout, though most of the subscribers really did not seem to care. Adm. Byrd was afraid the expedition might have to refund all the fees, thus bankrupting it.”

Receipt of this reply from Vogel sent me to my folder of Byrd expedition covers, and all but ...