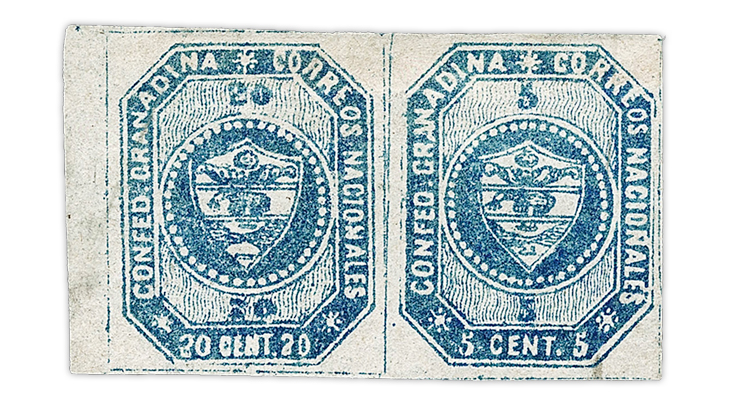 Only four examples of Colombia’s 1859 se-tenant 20-centavo and 5c stamp pair are known, and Robert A. Siegel Auction Galleries will offer three of them in its Sept. 29-Oct. 1 auction, including this example.

Robert A. Siegel Auction Galleries, in association with Charles F. Shreve, will hold an auction of Great Britain, British Commonwealth and worldwide stamps, covers and collections from Sept. 29 to Oct. 1.

Among the more than 830 lots in the auction are extensive offerings from the Gordon N. John collection of Colombia and Uruguay, and British Commonwealth material from the estate of Robert C. Leberman.

Much of the material from the John collection is in the form of mint multiples, including the most coveted varieties from Colombia’s 1859 first issue.

The example that opens the Wednesday session is the largest known multiple of the 1859 2½-centavo yellow green Coat of Arms stamp (Scott 1a), a block of 25 from the right side of the sheet.

The 20c blue stamp from the same issue has two particularly significant varieties: a tete-beche pair (Scott 6c), and the 20c se-tenant (side-by-side) with a 5c blue stamp that was mistakenly transferred onto the lithographic stone (6b).

The third example in this auction is part of a spectacular block of nine stamps (three across by three down), with the 5c starting off the second horizontal row. The block carries an estimate of $30,000 to $40,000.

The tete-beche variety is offered as well, as part of a handsome block of eight with corner sheet margins.

Four lots offer Cuban stamps with inverted centers, including a striking example of the 1910 10c orange and blue special delivery stamp with both of the stamp’s vignettes printed upside down (Scott E4a). The estimate of $500 to $750 is about half the current Scott catalog value.

Full details of the worldwide auction, including online bidding options, can be found on the Siegel website.