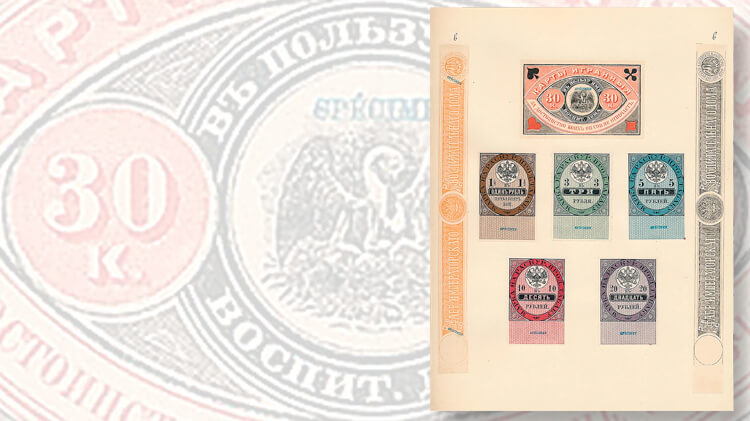 Russian-area cinderellas offered by Raritan Stamps at a sale in early December included an album page with a set of 1890s playing-card and tobacco license stamps. It sold for $747.50. 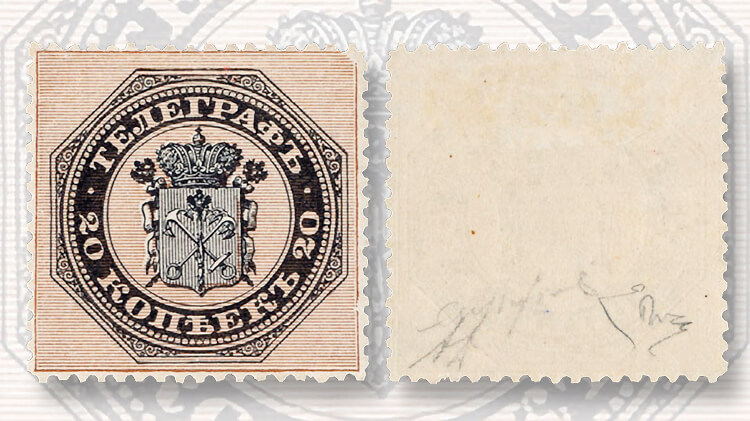 A 20-kopeck Russian telegraph stamp of 1866, one of only 14 known and the only one with a plate flaw that caused some missing shading, realized $28,750 at the Raritan Stamps auction held in Dayton, N.J., in early December. 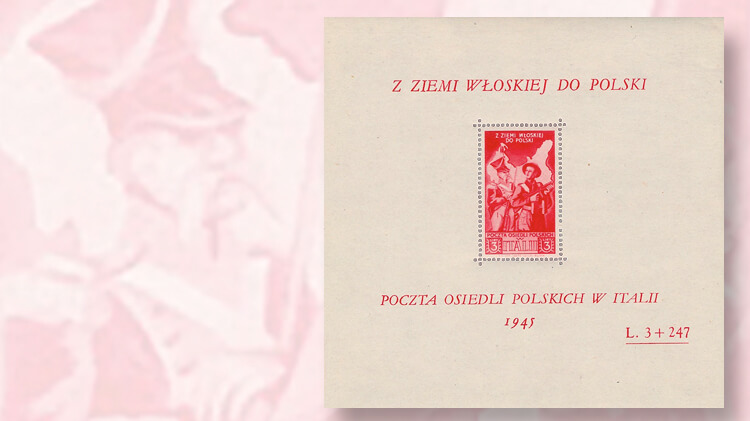 A 1946 souvenir sheet of one stamp issued by the Second Corps of exiled Polish officers and soldiers in World War II, and printed in the wrong color, sold for $690 at the Raritan Stamps auction in early December.
Previous
Next

Raritan Stamps held an auction Dec. 9-10 in Dayton, N.J. The sale featured a substantial number of lots from a collection of Russian-area cinderellas, which are stamps and labels produced for anything but postage: revenues, fees, propaganda or other purposes.

One of the more eye-catching lots was an album page containing a splendid set of Russian bicolored playing-card and tobacco license stamps from the 1890s. All but one were overprinted “Specimen.” Fresh and charming, the lot sold for $747.50, including the 15 percent buyer’s premium levied by Raritan on all lots.

A very scarce 20k Russian telegraph stamp of 1866, with an octagonal design featuring the words “Telegraph/20 kopecks 20” in Cyrillic letters around a coat of arms, showed a small flaw on its printing plate that resulted in a bit of missing shading in the top right corner.

Just 14 examples of this stamp survive, and the one with the flaw is probably unique, according to the firm. With full original gum, hinged, it sold for $28,750.

Like postage stamps, which prepaid letters, telegraph stamps paid the sending of telegrams, which was a government monopoly in many countries.

During the war, tens of thousands of exiled Polish officers and soldiers formed a force known as the Second Corps, which fought extensively in Italy and was highly regarded by the other Allies.

Numbering over 100,000 men at its peak, the corps issued a number of stamps and souvenir sheets, although their purpose seems to have been primarily philatelic rather than postal. Not listed in the Scott Standard Postage Stamp Catalogue, the issues can be found in Italian catalogs such as Sassone under the heading “Corpo Polacco.”

One of the souvenir sheets appears to have been printed in a wrong color: rose red. The 3-lira+247-lira sheet of one, with a stamp showing a pair of soldiers superimposed on a map of prewar Poland (Sassone BL3A), was issued in 1946. Mint and never hinged, it sold for $690.

Another lot, a collection of 82 Polish Corps stamps, seven souvenir sheets and three covers, presumably philatelic, including a number of proofs and unlisted varieties, went for $2,530.