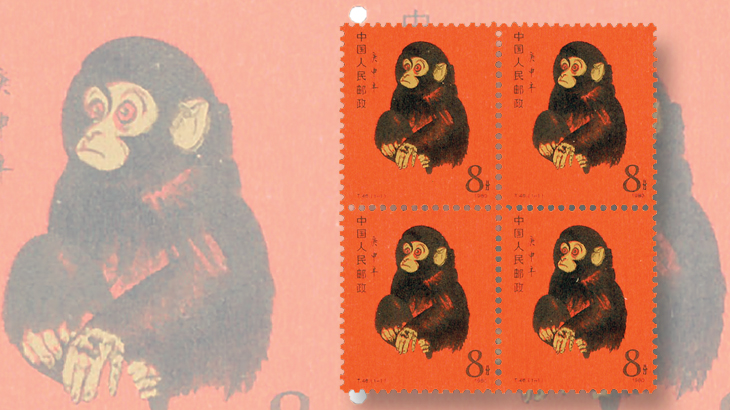 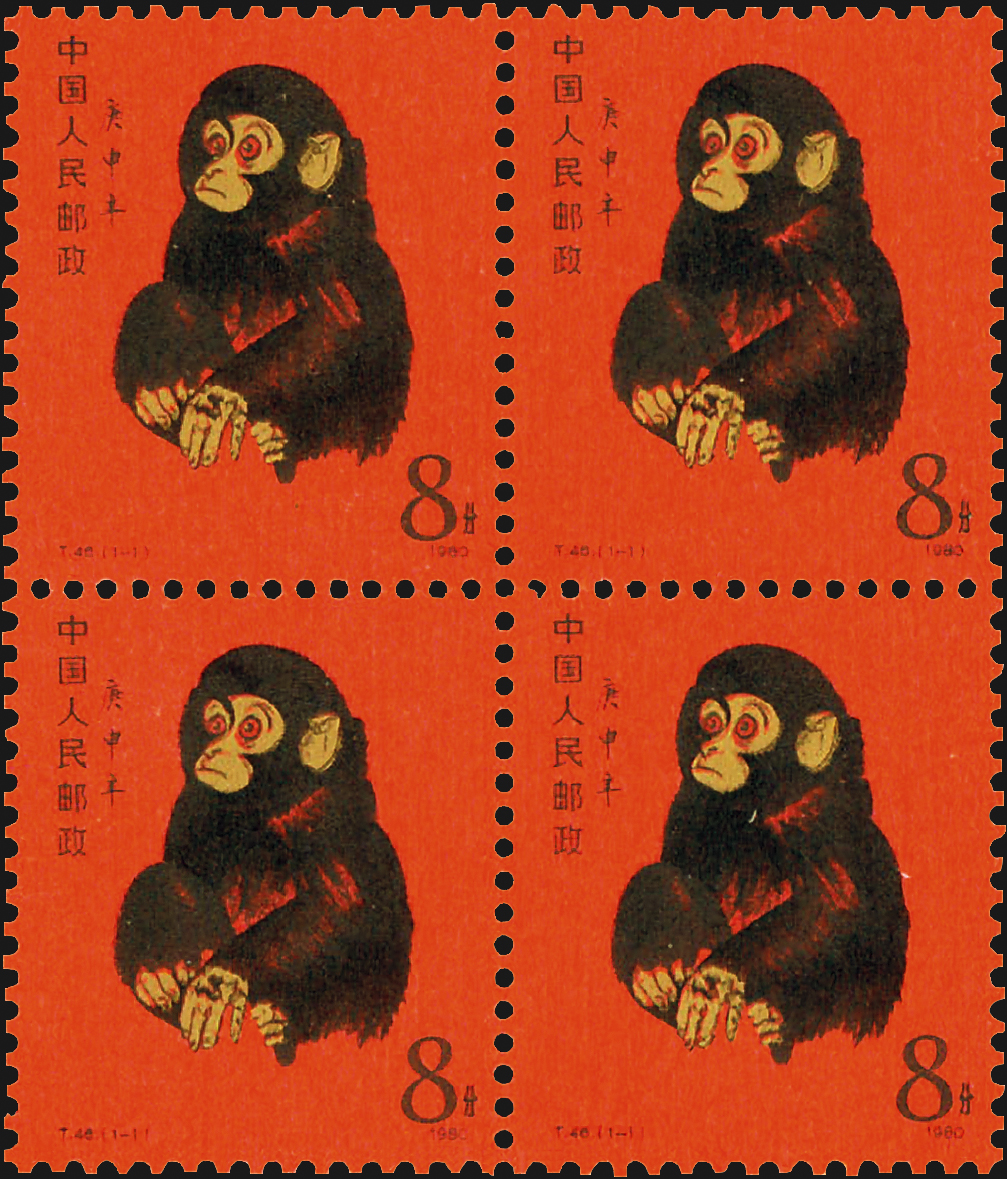 A never-hinged block of four of China’s 1980 8-fen Year of the Monkey stamp, to be offered at the Aug. 15-16 Rasdale auction.
Previous
Next

Rasdale Stamp Co. is presenting its 425th public auction Aug. 15 and 16 at the firm’s gallery in Westmont, Ill., just west of Chicago.

The auction lots are listed with images on the Rasdale Stamp Co. website, and bids can be placed online.

The current sale consists of more than 575 lots from 85 owners, and ranges from single stamps and covers to large lots, accumulations and collections.

The material on offer is worldwide in scope, with many U.S. regular issues, airmails and back of the book, plus international lots organized by individual countries.

Much of what’s being offered in this sale, including many of the large lots, comes from the stamp business of Ohio dealer Jim Linker, who died March 21.

Mr. Linker operated a retail stamp store in Columbus, conducted mail-order sales, and was a dealer at numerous large shows each year.

Rasdale notes that the consignment of Mr. Linker’s material in addition to the other lots in this sale results in ”the largest public auction ever assembled in the Midwest.”

The sale opens with supplies, literature, a few coins and currency lots, and a fun selection of miscellaneous collectibles. Cover accumulations and face-value postage follow.

Several of the stamp collections offer U.S. federal duck stamps in small and larger groups, with other offerings of mint and used stamps in various configurations.

A large number of foreign collections are offered on albums, stamp album pages, sales cards, counter books and the like.

This is the type of sale that offers something of interest to every collector.

The United States singles and sets grouping starts off with a selection of the 5¢ and 10¢ stamps of the 1847 issue (Scott 1 and 2) and continues with additional classic issues, including multiple examples of dollar values of the 1893 Columbian commemoratives and the 1898 Trans-Mississippi Exposition issues.

Among the National Bank Note issues with grill is an unused 1870 90¢ carmine Oliver Hazard Perry stamp (Scott 144) with a 2014 certificate of authentication from Professional Stamp Experts identifying the stamp as the split grill variety. The stamp is bright and centered fair to fine, according to Rasdale’s auction description.

The U.S. selection extends into the 1930 Zeppelin airmails and beyond, and includes the 1938 Presidential definitive issue, which offers high-denomination blocks, plate blocks and full coil rolls.

The general foreign singles and sets represent dozens of different countries. The British material includes multiple examples of the Penny Black and Two-Penny Blue (Scott 1 and 2), while Russia offers a range of single stamps and sets.

Among the offerings from the People’s Republic of China are two examples of the 1980 8-fen Year of the Monkey stamp: an unused single and a never-hinged block of four, both described as showing the usual black offset.

The sale concludes with individual covers, including a British Mulready cover canceled in 1841.