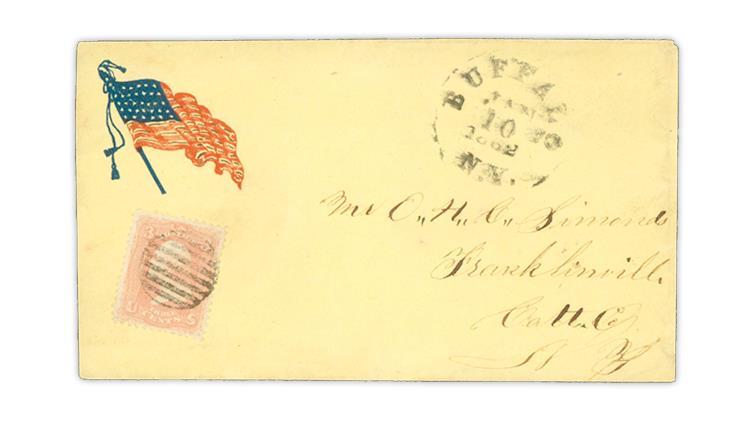 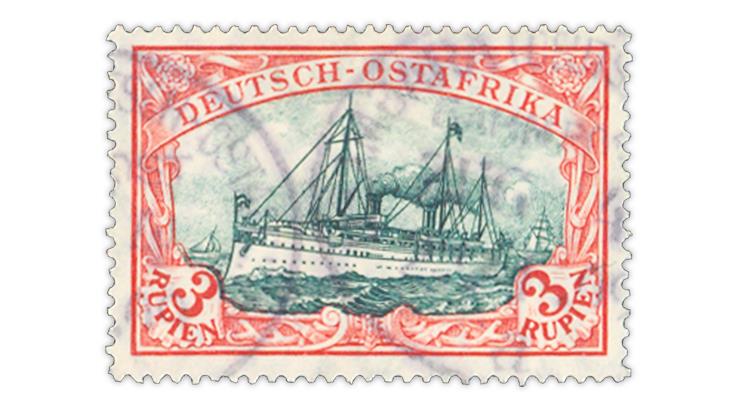 Stamps from Germany and German states feature prominently in the Rasdale sale. One of the German East Africa offerings is this used 1908 3-rupee bicolor stamp picturing the imperial yacht Hohenzollern.
Previous
Next

Rasdale Stamp Co. will conduct an auction of United States and worldwide stamps and postal history Nov. 14-15 at the firm’s gallery in Westmont, Ill. Each day’s session will begin at 10 a.m. Eastern Time.

The first day of the sale begins with a selection of philatelic supplies and literature, coins and currency, and miscellaneous collectibles, such as medals and watches.

More than 450 lots of collections, accumulations and stocks will be up for sale, beginning with several dozen U.S. collections.

One of the U.S. offerings Rasdale describes as a “straightforward bread and butter collection on a near brand new Scott Schaubek hingeless album from the Liberty Stamp Shop estate.”

Included in the accumulation, which is listed with a minimum bid of $2,100, is a set of 1893 Columbian card plate proofs. Rasdale notes that some of the items are accompanied by expertizing certificates.

Postal historians will find a wide array of United States and worldwide cover accumulations and individual covers to bid on, many of which have very modest minimum bids.

Among the United States covers up for bids is an attractive Civil War Union patriotic cover sent Jan. 10, 1862, from Buffalo, N.Y., to Franklinville, N.Y. The cachet (decorative design) at upper left features a U.S. flag.

Postage to send the letter between the two New York towns was paid with an 1861 3¢ rose pink George Washington stamp (Scott 64b), which is affixed just below the cachet. The stamp is just barely tied to the cover at right by a circular seven-bar killer cancel.

Rasdale notes that a 2008 Philatelic Foundation certificate accompanies the cover. In its opinion the foundation states that the stamp is “genuinely used on a patriotic cover” and that the cachet has “additional manuscript embellishments.” These “embellishments” appear as black lines on the white stripes of the flag.

The Scott Specialized Catalogue of United States Stamps and Covers values Scott 64b on a patriotic cover at $250. Rasdale lists the cover with a minimum bid of $28.

Worldwide stamps comprise the lion’s share of the auction and span all parts of the globe. Stamps from Germany and German states are particularly well represented.

One of the three lots from German East Africa to cross the Rasdale auction block is a used example of the 1908 3-rupee carmine and slate stamp featuring the imperial yacht Hohenzollern in the vignette (central image). Rasdale describes the stamp as being in fine-very fine condition and bearing a railroad cancellation.

Against a Scott Standard Postage Stamp Catalogue value of $240, Rasdale is offering the used Hohenzollern stamp with a minimum bid of $38.

Several colorful Swiss semipostal souvenir sheets will be offered. One of these is an imperforate sheet of one 40-centime bright blue stamp featuring three hooded figures waving flags (Scott B206).

The sheet, which sold for 3 francs, was issued Sept. 29, 1951, in celebration of the Lunaba National Philatelic Exhibition held Sept. 29-Oct. 7, 1951, in Lucerne, Switzerland. Net proceeds from the sale of the sheet were designated for Swiss schools abroad.

The Lunaba sheet in the Rasdale sale is never hinged and is offered with a minimum bid of $40. Scott values a never-hinged Lunaba sheet at $275.

An online catalog has been prepared for the two-day sale and is available for viewing on the Rasdale website. Online bidding options are available.