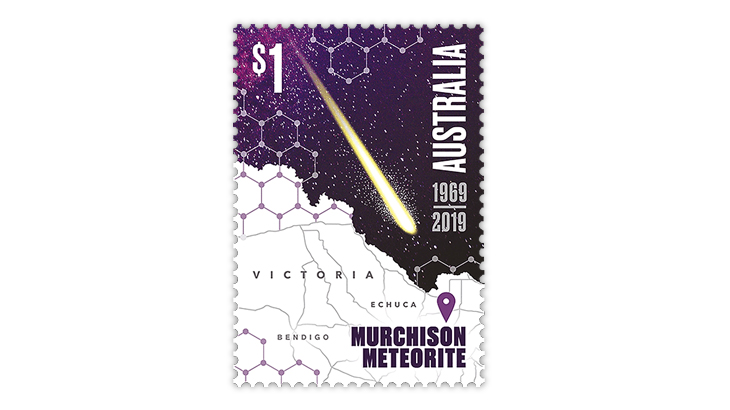 A new Australian $1 stamp marks the 50th anniversary of the Murchison meteorite. The meteor shower rained down around the small town of Murchison on Sept. 28, 1969. 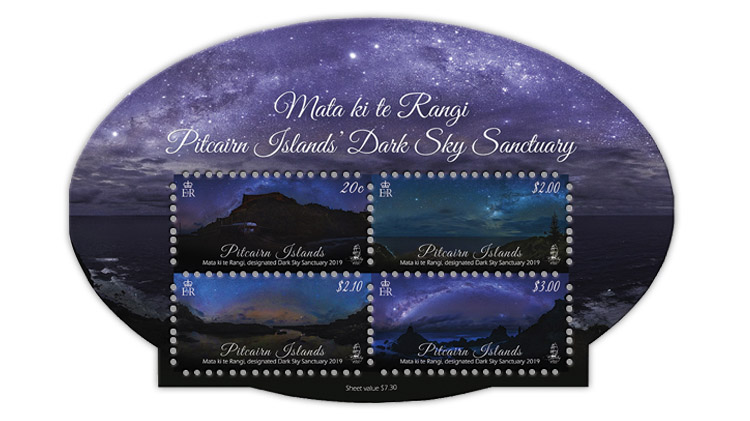 A souvenir sheet of four commemorative stamps from the Pitcairn Islands celebrates its designation as an international dark sky sanctuary. The sanctuary is named Mata Ki Te Rangi (Eyes to the Sky). 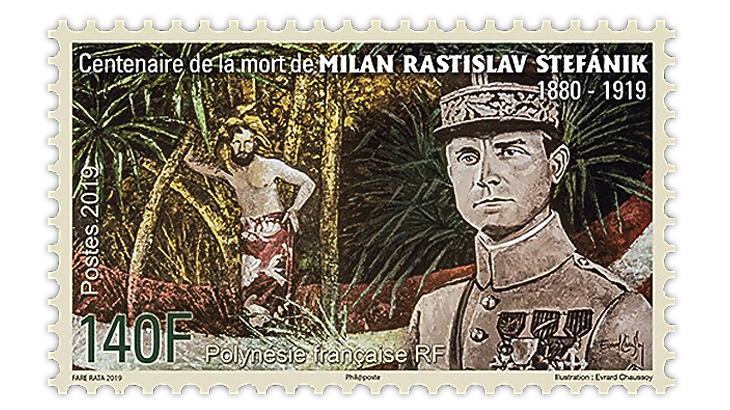 French Polynesia commemorates the 100th death anniversary of astronomer and diplomat Milan Rastislav Stefanik on this stamp issued Sept. 6. The design includes an image of Stefanik on a beach on Tahiti. 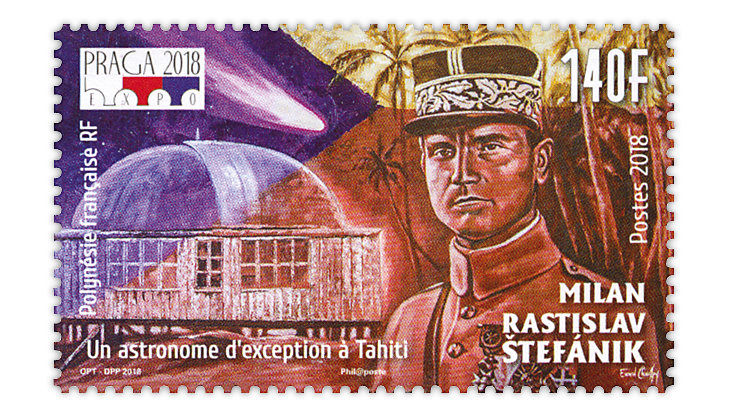 Milan Rastislav Stefanik and a representation of the observatory he built on Tahiti in the early 20th century are depicted on this French Polynesian stamp issued in 2018 to commemorate an international stamp exhibition in Prague.
Previous
Next

Australia issued a $1 domestic-rate stamp Sept. 10 to commemorate the 50th anniversary of a meteorite falling to earth near the town of Murchison in Victoria, Australia, on Sept. 28, 1969.

“Eyewitnesses saw the bright orange ball with a smoky blue trail passing through the night sky before it broke apart above the Earth with a sonic boom. Several hundred pieces fell around Murchison, ranging in size from a few ounces up to 113 pounds,” according to the PBS Exploring Space, the Quest for Life website.

One of the most studied meteorites in history, fragments of the Murchison meteorite are housed in museums in Australia, the United Kingdom and the United States (the Smithsonian Institution in Washington, D.C., and the Field Museum of Natural History in Chicago.)

Michael Zsolt, Australia Post’s philatelic manager, said: “The Murchison meteorite retained many chemical properties from the time of its formation some 4.56 billion years ago and may even be a fragment of a comet. It has been extensively studied due to its rarity and the large amount of material recovered.”

Tim Hancock of the studio Backpack Creative designed the stamp. His design shows the meteorite falling to Earth, a partial map of the state of Victoria with Murchison highlighted and hexagons, which according to Australia Post “suggest the structure of the amino acids that were found in the meteorite.”

Scientists have identified more than 90 amino acids in this carbonaceous chondrite meteorite.

RA Printing printed the commemorative stamp by offset lithography. It is sold in panes of 10.

The association was founded in 1988 to protect the night skies for present and future generations, according to its website.

In its announcement about the Pitcairn Islands, the association said that these remote islands in the South Pacific Ocean were “the only island group in the world to be granted this status as well as the first British Overseas Territory to become an International Dark Sky Sanctuary.

The only inhabited island in the group, Pitcairn, has a population of about 50, most of whom are descendants of the mutineers of HMAV Bounty and their Tahitian companions.

Both the stamps and the selvage of the sheet reproduce photographs taken by landscape and astrophotographer Chris Pegman. Denise Durkin designed the souvenir sheet, and Southern Colour Print of Dunedin, New Zealand, printed it by offset lithography.

For the second year in a row, French Polynesia has issued a stamp honoring Milan Rastislav Stefanik, the politician, general and astronomer born July 21, 1880, in Kosaras, Austria-Hungary (now Kosariska, Slovakia).

This 140-franc stamp includes two images of Stefanik. He is shown in military uniform on the right, and wearing a sarong on a Tahitian beach on the left.

Stefanik came to Tahiti in 1910 to observe Halley’s Comet, staying for nearly a year. He also made later visits to the island.

A French-language inscription in the selvage of the pane of 10 mentions his work as an astronomer and his love of the islands: “Un astronome d’exception et un amoureux de Tahiti et ses iles” (an exceptional astronomer and a lover of Tahiti and her islands).

Evrard Chaussoy created the illustration for the stamp. Philaposte, the French security printer, printed this commemorative by offset.

This 140fr stamp (Scott 1214) shows the portrait of Stefanik as a general and also depicts an image of the observatory he built on Tahiti.

In announcing that stamp, French Polynesia Post said: “Stefanik lived nearly a year in Tahiti in 1910. He landed on May 1st, 1910. He went back there in 1913 on his way to Ecuador. His task was to observe the passage of Halley’s comet in Tahiti and the solar eclipse of April 28th, 1911 in Vavau (Tonga).

“To make his observations, he set up a wooden Observatory on the hills of St. Amelie at Mont Faiere. He was very popular with the natives, who gave him the name ‘Taata Hi’o Feti’a,’ ‘the man who looks at the stars.’ The Observatory was accidentally burned on September 9th, 1948.”

Among the other postal administrations that have issued stamps featuring Stefanik are Czechoslovakia, France and Slovakia.