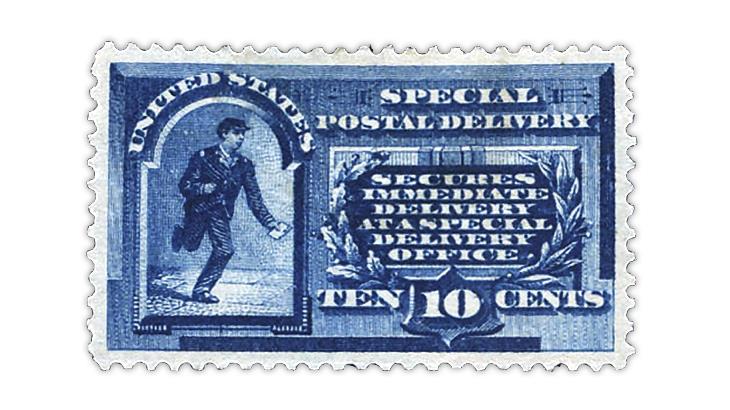 Figure 1. This 1885 10¢ special delivery stamp (Scott E1) looks terrific, but unmentioned problems were found when the successful bidder received it in the mail. 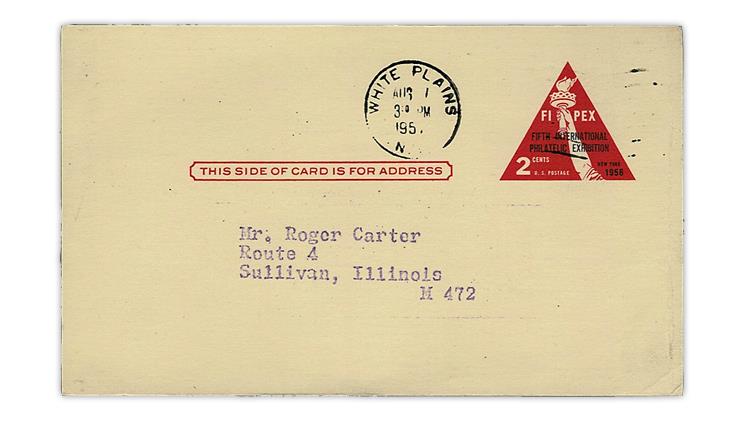 Figure 2. What was offered as a rare variety of the 1956 2¢ 1956 Fipex postal card was offered to an eager buyer, but expertizing revealed that it was a much less desirable error. A normal example of the card is shown.
Previous
Next

This continuing column on expertizing receives all sorts of questions from readers. Let’s look at a couple of them that should be of interest to all of us who buy better stamps.

The first letter is from David Phillips, and it is about the 1885 10¢ special delivery stamp (Scott E1), shown here in Figure 1.

Phillips wrote: “Recently I purchased a lot in an auction that came with a May, 2021 certificate stating ‘Grade 98, og, hinged’ for a Special Delivery stamp [Scott E1].

“Upon receipt of the stamp I noticed upon examination that the stamp had a ‘tweezer-like’ indent on the front (likely came about from removal of a hinge remnant) & a wrinkle above the hinge on the gum side. Should this observation have been noted in the opinion? Or, is it the responsibility of the auction house to disclose these problems in the lot’s description, given the indent likely lessens the perceived (subjective) value of the stamp?

“I returned the lot and the auction firm agreed to take the lot back without hesitation, and apologized.”

Next it is important to understand that centering is the most important element in determining grade, and this Scott E1 is nearly perfect in this regard, but that does not mean the rest of the stamp properties are similarly near perfect.

The flaws Phillips mentioned might be so minor as to go unnoticed by a single expertizer. However I would hope that someone among multiple expertizers looking at this patient (the item submitted for expertization) should have observed them and noted them on his or her worksheet. But if the expertizing house does not as a matter of standard practice note such flaws on its certificates, well, I guess customers get to vote with their wallets.

I would expect the auction house to note obvious flaws, whether mentioned on a certificate or not. I think most do if noted on a certificate. But others may think it would limit the number and amount of bids. Instead those houses would rely upon their return policies, knowing that few buyers will inspect their purchases carefully and will just keep the lots.

They can then claim virtue by allowing buyers to return unsatisfactory lots (within a stated time period), but I wonder how many such lots then go back into the next auction with no change from the original description? An ethical firm would not do that, but I have heard too many stories that tell me that it does happen.

Phillips also mentioned that he had dealt with a different auction house on a different stamp that he sent for expertizing after his bid was successful. It came back with a notation that the stamp had been lightly hinged — a fact not noted in the auction description. He attempted to return the stamp, but the auction house (no longer in business as this is written) refused, saying that it had not been informed that the stamp was on extension pending a good certificate.

This is a process that allows buyers to delay acceptance of (but often not payment for) a stamp for a reasonable amount of time until a good certificate is obtained. The buyer is indeed obligated to tell the auction house that the stamp is on extension. If the resulting certificate is not good, the auction house is obligated to take the stamp back and refund the payment.

Phillips had informed the auction house but had not kept a copy of his notification, so he could not prove it. And, as he said, he was “stuck with” the stamp.

The lesson here is this: Always retain a copy of correspondence regarding problems arising from purchases.

The second question comes from Ed Cahoon, who bought what was advertised as an error of color U.S. postal card, the 1956 2¢ Fipex in pink instead of deep carmine (Scott UX44h). A normal example of that card (UX44) is shown in Figure 2.

He sent the postal card to an expertizing house, which returned it with an opinion saying it was Scott UX44f (rose pink), a much less desirable variety.

The dealer who sold the card to him criticized him for using the expertizer he chose, as the dealer uses a different one. The dealer took the card back and refunded the money, but said he would submit it to his expertizer and would be back in touch. That was in December 2020, and Cahoon has not heard from him since.

This tells me that the dealer either found another buyer, or he got an opinion from his preferred expertizer that agreed with Cahoon’s.

Either way, Cahoon wonders why a dealer would not have secured a certificate before marketing something he thought was as rare as this error, which catalogs $1,500 unused. And he wonders if he could have trusted the new certificate from the dealer’s preferred expertizer if it had come back as a genuine Scott UX44h.

My answer to the second question is definitely yes. I don’t believe that any reputable expertizing house will cook the books. If it says it believes an item is genuine in all respects, then that is the conclusion of its expertizer(s). Yes, it is possible for reasonable people to disagree through giving different weights to objective facts. But it doesn’t happen often, and it doesn’t result from an effort to reach a predetermined conclusion based on who submitted the item or some other prohibited factor.

The matter of why the seller did not get a certificate before marketing the postal card is a bit murkier, and, of course, we don’t know for sure.

But it is fair to say that some dealers would not want to spend the money and/or take the time to get something expertized if they didn’t have to, thus leaving that expenditure to the buyer. And also some dealers would not want to ask the question unless they were 100 percent certain of the answer especially if they felt they could sell the item at a certain price without it (let alone the fact that with a clean certificate, a dealer likely could have charged more, at least enough to cover the cost of the certificate).

Neither of the reasons I offer says the dealer is dishonest. Rather they suggest that the dealer may be opting for the quick sale, perhaps hoping that the buyer will not do any further checking on the item, and if he does, that the dealer will avoid the fees involved.

So, if you will permit, I would like to offer three more recommendations:

1. Always read the terms of sale with care. This is especially important if you are dealing with a seller you have not dealt with before.

2. If you have any reason to doubt the legitimacy of an item or the accuracy of the description of something being sold without a certificate, or you simply want to do due diligence, put the item on extension and send it in for expertizing.

3. Remember to calculate the cost of a certificate when buying or bidding on something you want that does not have one.

Next month I plan to look at more reader questions.