Our readers have spoken, and the July cartoon caption contest winners are ... 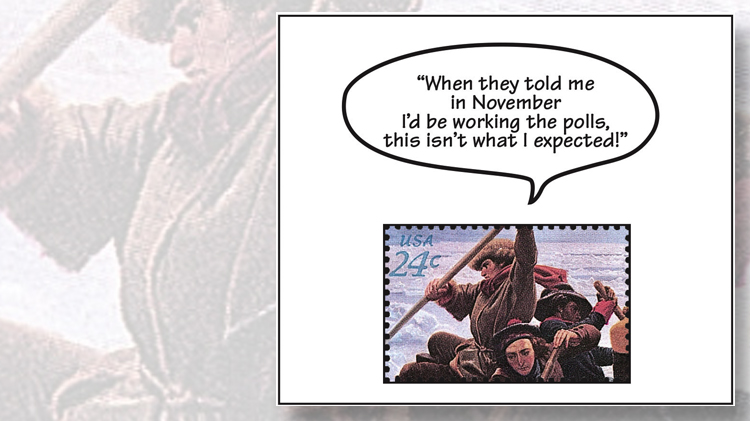 The July cartoon caption contest featured the 24¢ stamp on the far left of the 1976 Bicentennial souvenir sheet picturing Washington’s crossing of the Delaware. The winner of the nonphilatelic part of the contest, Mildred Barylski of Warrenton. Va., was t

There is often a considerable difference between what the generals think and what’s on the minds of the soldiers at the tip of the spear.

In the June cartoon caption contest, we heard from Gen. George Washington as he was crossing the Delaware River, as shown in the painting by Emanuel Leutze that served as the design of a Bicentennial souvenir sheet issued in 1976 (Scott 1688).

For the July cartoon contest, I asked Linn’s readers to put themselves in the position of the rowers doing the work to get their perspective on the operation. The stamp selected for that contest is on the far left of the sheet (Scott 1688b).

Several readers chose as their theme the icy weather being endured, citing the unofficial creed of the post office as being appropriate: “Neither snow nor rain nor heat nor gloom of night stays these couriers from the swift completion of their appointed rounds.”

Michael Generali of Round Rock, Texas, summed up the reaction of the rowers to the weather with “Wait until I get my hands on the guy who said that crud about neither snow nor rain … ”

Another set of comments on the weather answered the question, “How cold is it?” The best of these entries came on a postcard sent anonymously from Maine:  “It’s so cold I can hear the chattering of Gen. Washington’s wooden teeth.”

Some cartoon contestants brought the scene into the modern age with observations about Governor Chris Christie and his problems with Bridgegate, the popular name for the 2013 scandal associated with the closure of lanes to the George Washington Bridge at Fort Lee, N.J.

This group is represented by Terry Meier of Tampa, Fla.: “I’m glad we’re going by boat. I hear those Jersey bridges can be trouble.”

The winner in the nonphilatelic part of our contest relied upon the fact that Gen. Washington also assumed the role of politician, running for president after the British had been chased out of the former colonies. This line is the work of Mildred Barylski of Warrenton, Va.

On the philatelic side of the contest, John Himes of Cypress, Calif., wins the prize with “Let’s unhinge the British, stamp them out, grill the captives, and cancel their campaign!”

Bernice Fields of Minneapolis, Minn., who entered the contest, made note of something I had not paid attention to in the stamp design: Two of the soldiers on the stamp are black Revolutionary War fighters, one named Oliver Cromwell and the other Prince Whipple.

After enlisting in his early 20s, Cromwell served in numerous battles with Gen. Washington.

Prince Whipple was a slave to William Whipple, a signer of the Declaration of Independence from New Hampshire and a general during the American Revolution.

These are only two of the thousands of black soldiers who fought for independence from Great Britain.  Apropos of this theme, Field’s entry is: “I wonder how this ‘all men are created equal‘ idea is going to work out?!”

“If I told you once, I’ve told you a thousand times, NEVER volunteer!” sent by Richard Solomon of Vail, Ariz.

“I never imagined that this job would turn out to be such an oar-deal!” from Steve Kotler of San Francisco, California.

“It’s not the ice that worries me. It’s those darn floating plate numbers — you never know where they’re going to pop up!” by David Schlottmann of Olympia, Wash.

“I told him to buy Martha’s Christmas present in New York, but nooooooo — now the only stores open are in Trenton!” by Jim Brooks, assigned abroad.

“This is the last time I accept an invitation to a boating party!” from Steve Billings of Memphis, Tenn.

The next cartoon caption contest will be announced in the Sept. 11 Linn’s.