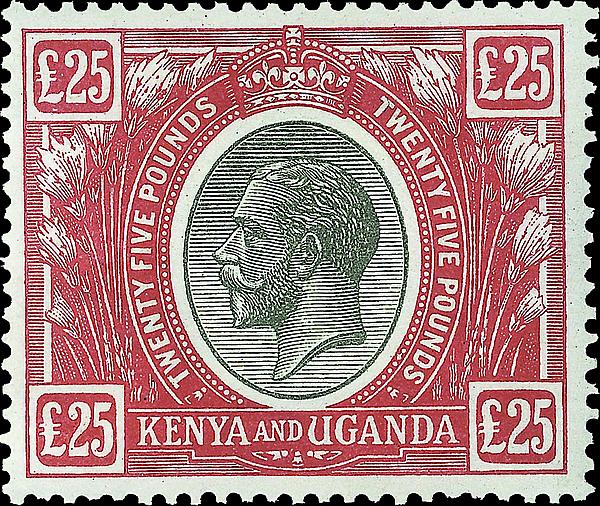 The May 14-15 Robert A. Siegel Auction Galleries sale included an unused Kenya and Uganda £25 King George V stamp that sold for $43,125.

The 1909 Canal Zone 1¢ Balboa with inverted center sold for $21,850 during the Cherrystone auction at the end of April.

A famous Canal Zone inverted-center error, the 1909 1¢ Balboa (Scott 31a), wasn’t discovered until 23 years after it was issued, when a collector removed it from a postcard sent to his sister. A second example surfaced in the 1950s and a third, heavily damaged one turned up in the 1960s.

The fourth and last so far discovered, featured in the Cherrystone sale, was found in 1979.

Well centered, with a violet Cristobal postmark and scissor-separated perforations at right indicating it originated from a booklet, the stamp has but a faint crease. It sold for $21,850.

Robert A. Siegel Auction Galleries held a sale of worldwide material in New York City May 14-15.

According to the “Search for Comparables” feature at Siegel?Auctions.com, the same example was offered by the firm in 2000, when it realized less than a quarter of the present realization.

The difference attests to the strong rise in prices for stamps of China in the intervening years; the Scott catalog value for the stamp has risen 20-fold over the same period.