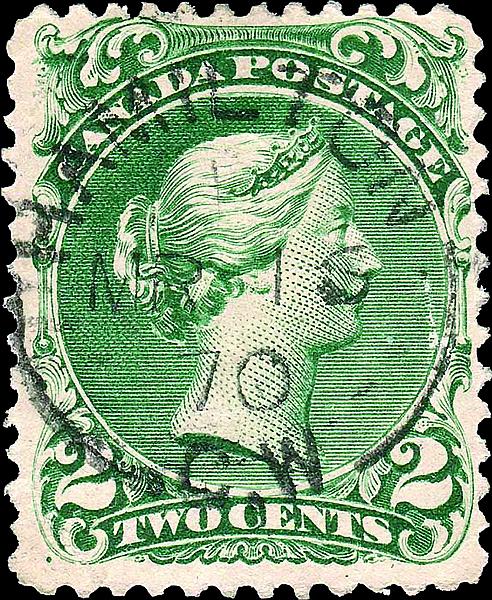 The recently discovered third known example of Canada’s 1868 2¢ Large Queen on laid paper was sold during the Oct. 16-18 auction by Eastern.

In Halifax, Nova Scotia, Eastern Auctions held a sale of Canadian and worldwide stamps and postal history Oct. 16-18 (previewed in the Oct. 13 Linn’s).

The star of that sale was a newly discovered third example of Canada’s 2¢ Large Queen of 1868 printed on laid, rather than wove, paper (Scott 32). The stamp was found in a sales circuit last year by a sharp-eyed collector for “a little over $50,” according to Yohann Tanguay of Eastern.

At the time, only two other examples were known.

Like the other two, this third stamp has a Hamilton, Ontario, postmark. The new discovery has been judged the finest of the three known, notwithstanding a couple of creases and a small internal tear.

It is well centered with fresh color and intact perforations, and the light upright postmark is socked on the nose.

The Greene Foundation, the leading organization certifying the authenticity of Canadian stamps, issued a 10-page forensic study confirming the stamp’s identity. The lucky finder’s total investment in stamp and certificate came to around $100.

It pays to look at stamps carefully: The new find was auctioned for $215,000 in Canadian dollars (about $220,000 in United States dollars) including Eastern’s 15 percent buyer’s premium.