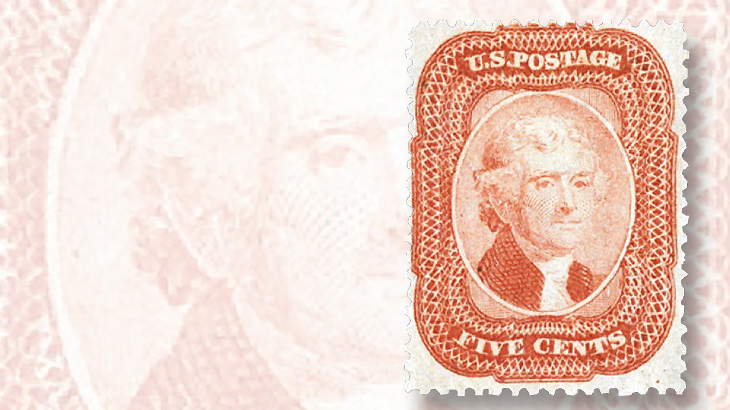 An unused lightly hinged original gum example of the 1858 5¢ brick red Thomas Jefferson type I stamp will be offered during the May 2-4 Flagship series auction by Daniel F. Kelleher Auctions in Danbury, Conn.

Daniel F. Kelleher Auctions will hold its next public auction May 2-4 at the firm’s office in Danbury, Conn.

The auction is scheduled to feature items from the Stanley J. Richmond holding of stamps, the “Best” collection of United States, the “Newbury Park” collection, the “Reno” holding of British Empire and British North America, the “Jointdoc” collection of worldwide booklets, and the Lester F. Pross collection.

The upcoming sale is the first of three Flagship sales scheduled by Kelleher over the course of seven weeks.

Worldwide stamps and postal history, including Great Britain and the British Commonwealth, are featured on the first day of the three-day auction.

The British offerings include a set of three complete panes of 1997 trial color printings of the Machin definitive stamp.

The 100-subject gravure-printed panes are in three colors: deep green, light gray and flame. Each subject shows the familiar portrait of Queen Elizabeth II based on Arnold Machin’s plaster bas relief, but with no denomination or other inscription within the stamp design.

The sheet margins include an inscription identifying that they were printed by Helio Courvoisier in Switzerland.

Details of the new discovery of these fully finished, perforated and gummed trials were reported Jan. 30 on Linns.com. That report notes that the British catalog publisher Stanley Gibbons confirmed that these trial color printings will be included in their Great Britain Specialized Stamp Catalogue, Vol. 4, Part 2 (Queen Elizabeth II Decimal Definitive Issues).

Kelleher notes that the three panes are never hinged, and each is accompanied by a 2017 certificate from the Royal Philatelic Society London. The estimate for the three panes offered as a single lot is $15,000 to $20,000.

The auction also offers a large selection of stamps from British North America, including the imperforate first stamp of British Columbia and Vancouver Island, the 1860 2½-penny dull rose, along with a number of Newfoundland’s famous airmail issues, including an unused 1919 3¢ overprinted issue for the Hawker flight (Scott C1), and a used single 60¢ stamp overprinted in 1927 for the Francesco de Pinedo flight (C4).

Singles and multiples of Canada’s 1897 Queen Victoria Jubilee issue are also on offer, with used, unused and mint examples available.

Russian-area material in this auction includes a selection of Tannu Tuva material, with a never-hinged block of four of the 70-kopeck Tuvan on Horseback stamp surcharged 3kop with the overprint inverted (Scott 31a).

The selection of worldwide booklets offers material from Germany, Australia and states, Luxembourg, Sweden and more.

Many hundreds of United States classic stamps will go under the hammer in this auction, and a key item on offer is a lightly hinged original gum example of the 1858 5¢ brick red type I Thomas Jefferson stamp (Scott 27).

Kelleher describes this stamp as “the most impressive mint example we have ever had the pleasure to offer at public auction; a completely sound and choice 5 cent brick red shade with breathtaking color.“

The stamp with original gum is valued in the 2017 Scott Specialized Catalogue of United States Stamps and Covers at $80,000.

This example, accompanied by a 1958 American Philatelic Society certificate plus Philatelic Foundation certificates from 1974 and 2015, is offered with an estimate of $40,000 to $60,000.