Reflecting on a hobby mentor 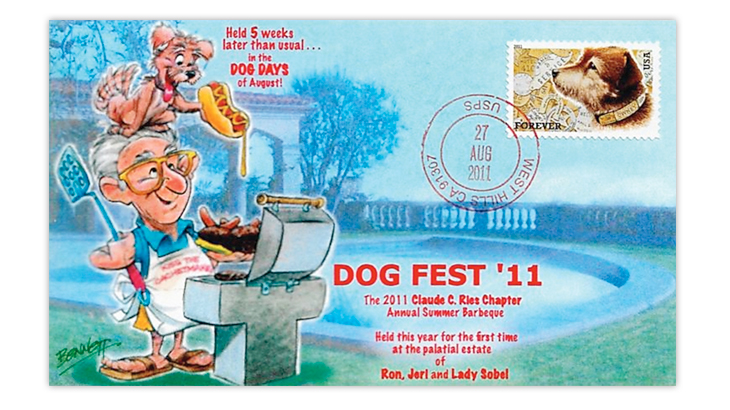 A caricature of Ron Sobel, a first-day cover dealer from California who died on Oct. 5 at age 80, is featured on this 2011 cover created by cachetmaker Dave Bennett. Sobel hosted the Claude C. Reis Chapter of the American First Day Cover Society on occasi

Never underestimate the power of little things. You might find out you were a mentor for someone in the hobby but didn’t realize it.

I paused on Oct. 6 after learning of the passing of a friend who had an impact on my life, Ron Sobel of California, at age 80. He was a first-day cover dealer who I first met in person in July 2000 while attending the World Stamp Expo show in Anaheim. Calif.

At that show, I met a number of now-longtime friends, many who are members of the Claude C. Reis Chapter of the American First Day Cover Society.

In 2000 I started my own cachet line, FPMG Cachets. I continued creating these cachets for about five years to help fund my college expenses. When calling me, Ron always addressed me as “Future Postmaster General.”

It was with Ron’s encouragement that I attended my first Americover FDC convention in August 2001, and he further suggested that I continue from that show in Denver, Colo., to Hollywood for the issuance of the Lucille Ball stamp (Scott 3523).

We flew together from Denver to Los Angeles, and with his help we arranged for the new stamp to be available at the 24-hour post office near the airport. At 12:01 a.m., I was the first to purchase the stamp, and we created a few covers. And of course, we attended the first-day event later that morning.

Over the next few years, while I was in college, I helped create cachet designs for Ron and a pictorial postmark for Walt Disney’s 100th birth anniversary event on Sept. 21, 2001, in Marceline, Mo.

I enjoyed our phone calls while he was stuck in traffic, conversations about FDCs and the happenings in the Avery Dennison label business (he was an Avery Dennison distributor).

Another highlight was meeting his son Glen Sobel, currently the drummer for Alice Cooper, after a Beautiful Creatures concert in Madison, Wis. Ron was very proud of his son.

We had lots of great memories attending first-day ceremonies in California and at stamp shows. I know I postmarked thousands of his covers over the years.

All of those little moments throughout the course of our more than 20-year friendship impacted where I am today, and I am grateful for it.

It really is the little things that go a long way. Now is a great time to reach out to that stamp collecting friend, mentor or even someone starting out in the hobby, just to say hello or keep the conversation going. You never know how much of an impact it could have.

How to transform younger, specialized collectors to expertizers

Add to your own stamp collecting fun by becoming a mentor