Reflections on a decade of showcasing philatelic treasures 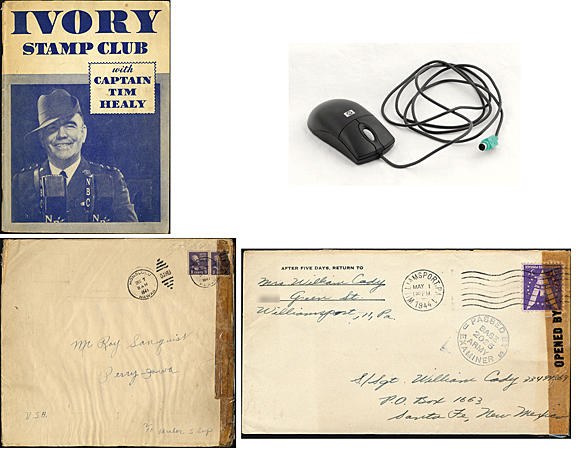 The four items pictured here are among the National Postal Museum’s acquisitions from the past decade.

This is my last column for Linn’s before my retirement as the chief curator of philately at the Smithsonian National Postal Museum.

I have had the privilege of this dream job, taking my avocation and turning it into my vocation, for a decade. I learned so much, had many great experiences and met many wonderful collectors.

Daniel Piazza will continue writing the National Postal Museum Treasures column for Linn’s, so for my last column I want to reflect on what a great decade it has been for philately at the museum.

Before my predecessor W. Wilson Hulme and I were hired, there had been a fair amount of criticism about the museum exhibits not appealing to stamp collectors and being buried in the vault.

When director Allen Kane came on board, he made several strategic moves to change that. He hired philatelic curators, revamped the Council of Philatelists and sought funding for high-profile philatelic exhibits.

Under Hulme, exhibit content focused on rarity to bring serious collectors to the museum to see what they probably did not have in their albums back home. He sought collections on loan that were inaccessible to the average collector.

Collectors came, especially during the 2006 world philatelic exhibition in Washington, D.C. However, the majority of our visitors, who are still “potential collectors,” did not spend time in these exhibits. They needed more than pages of rare stamps.

When I had the opportunity to re-envision the philatelic exhibits, I chose to make philately accessible to all visitors by selecting rare philatelic objects and framing them with strong narratives to offer a fresh perspective of history and culture. This “Every Stamp Tells a Story” model has been very successful, especially with strong graphics and increased interactives (films to QR codes to Twitter questions) in the exhibits.

The emphasis of selection has shifted to the museum’s holdings with gaps filled by loans. In fact, the plan for exhibits is no longer just about the objects shown; there is a stronger focus on the visitors and their experiences.

New museum acquisitions also include donations to the National Philatelic Collection. The curatorial plan offers guidelines so that the museum does not acquire duplicates or items that do not fall within the mission. As a result, many offers to donate are rejected. Pictured on this page are examples of some of the acquisitions from the past decade.

So what are some highlights of the past decade at the museum? There are many, but the festivities during the Washington 2006 World Philatelic Exhibition offered an opportunity to showcase the museum, its staff and initiatives at the stamp show and at the museum.

The museum launched the Arago online database, and web content has grown along with web visitors at amazing numbers.

And, most importantly, we opened the William H. Gross Stamp Gallery, the world’s largest postage stamp gallery, which has increased visitorship and brought new visibility to philately through increased press coverage in a wide range of media.

What are highlights to come? I will be watching the ongoing and new initiatives with you. Of course, curators will continue to prepare fantastic rotating exhibits around exciting themes, the museum will resume exhibits at selected major stamp exhibitions, and the web content will grow to stay ahead of the global boom of online visitors.

The museum will participate in World Stamp Show–NY 2016 and continue to expose millions of families to the joys of collecting stamps.

Curators and museum educators will strive to reach new audiences.

The opportunities are endless and the dream of sharing the joys of philately continues.

Cheryl Ganz is the Smithsonian chief curator of philately. The National Postal Museum is devoted to presenting the colorful and engaging history of the nation’s mail service and showcasing one of the largest and most comprehensive collections of stamps and philatelic material in the world. It is located at 2 Massachusetts Avenue N.E., Washington, D.C., across from Union Station. For more information visit the museum website at www.postalmuseum.si.edu.

Editor's note: The photograph nearby shows four items that are among the National Postal Museum’s acquisitions from the past decade.At upper left, an Ivory Stamp Club album from the 1930s was donated by the Richard B. Graham family. The Ivory Stamp Club of the Air was a radio show that aired in the mid-1930s, hosted by Capt. Tim Healy. One child listener who filled the album with stamps was renowned postal historian Richard B. Graham. At upper right, a computer mouse, circa 2010, was donated by Terry McCaffrey, who designed, directed or influenced some 2,500 stamps during his 40 years with the United States Postal Service. Today, art directors and stamp artists use computers in the creative process. At lower left, a Pearl Harbor 8 a.m. cover, 1941, was donated by the John Rion estate. The Honolulu post office cancel on this oversized envelope reads 8 a.m., Dec. 7, 1941, the exact time that Japanese torpedo planes struck nearby Pearl Harbor. Mailed by Marine Pfc. John Rion, it is addressed to his friend and business partner in Perry, Iowa. Rion survived the attack. At lower right, a Manhattan Project cover, 1944, donated by Janet Klug. During the Manhattan Project, employees working at Los Alamos, N.M., on the atomic bomb had their mail sent to an undercover address that would not reveal their whereabouts: P.O. Box 1663, Santa Fe, N.M.