A vertically imperforate error pair of the United States 1938 6¢ Eagle airmail stamp will be offered in the Regency-Superior auction at the St. Louis Stamp Expo. 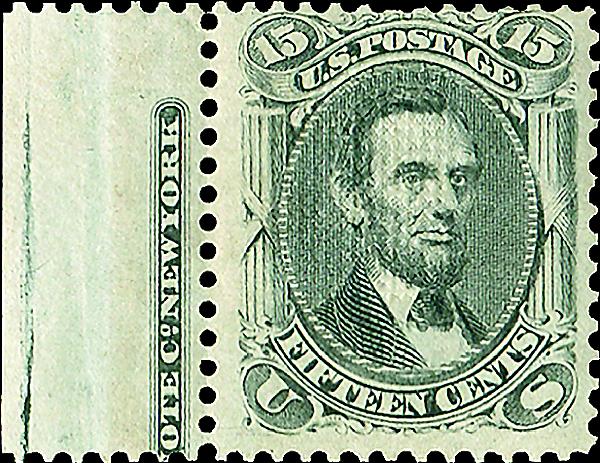 Regency-Superior will offer this unused 1868 15¢ black Abraham Lincoln stamp with F grill during its March 22-23 auction at the St. Louis Stamp Expo.

The two-day Regency-Superior auction during the St. Louis Stamp Expo will include 3,000 lots of United States, British and worldwide stamps and covers, as well as country collections and box lots.

The stamp show will take place March 21-23 (Friday through Sunday) at the Renaissance St. Louis Airport Hotel; the auction will be held in two sessions on Saturday and Sunday.

The first session begins March 22 at noon with U.S. stamps and a large selection of errors. A featured item will be an unused example of the 1868 15¢ black Lincoln with E grill (Scott 91) with partial imprint in attached selvage at left.

Regency-Superior describes the stamp as having fresh color and impression with a well-defined grill, previously hinged with full original gum. It is accompanied by a 2003 Philatelic Foundation certificate.

Two inverts from the 1901 Pan-American Exposition issue are included in the auction: the 2¢ carmine and black Empire State Express Train stamp (Scott 295a) and the 4¢ deep red brown and black Electric Automobile stamp (Scott 296a).

The 2¢ is described as very lightly hinged with full original gum, fresh gum and color.

Among the many errors in the Regency-Superior auction is a previously hinged horizontal pair, imperforate vertically, of the U.S. 1938 6¢ dark blue and carmine Eagle airmail stamp (Scott C23b). This example has five diagonal perforation holes across the lower right corner of the right-hand stamp and attached sheet margin selvage at left. It is provided with a 1998 PF certificate plus a photocopy of the original pane of 50 from which it came. It is offered with an opening bid of $7,500 and an estimate of $10,000.

The second auction session begins at 11 a.m. Sunday with a wide selection of British and foreign singles, as well as Canadian errors, philatelic covers and more.

The auction times provided are local for the Central Standard Time.

The Regency-Superior auction can be viewed online at www.regencystamps.com, with online bidding available.