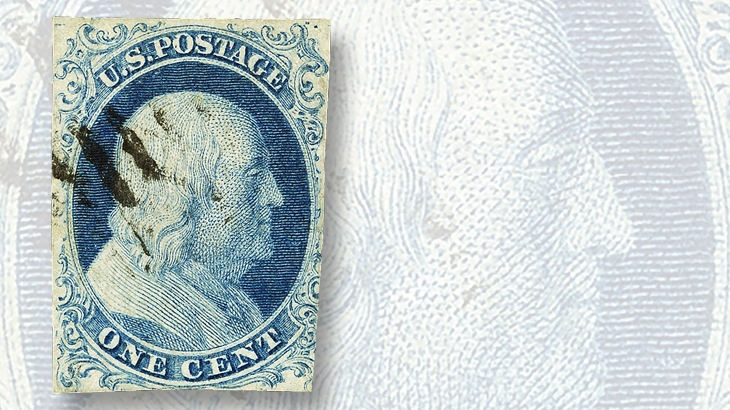 This example of the scarce 1851 1¢ blue Benjamin Franklin type I will be offered at auction April 1-3 by Regency-Superior in St. Louis, Mo.

The next Regency-Superior public auction will take place April 2-3 at the St. Louis Stamp Expo 2016 in St. Louis, Mo.

The first auction session on Saturday includes some 38 lots of coins and currency, followed by United States stamp singles and sets.

Early in the Saturday session, Regency-Superior will offer a used example of one of the most highly prized U.S. stamps, the 1851 1¢ blue Benjamin Franklin stamp type I, the position 7R1E stamp (Scott 5).

In the auction catalog listing, Regency-Superior describes the stamp as an “Outstanding example of one of the most difficult 19th century U.S. stamps, with only a handful of sound, essentially 4-margin stamps known.”

The stamp has margins “large to just grazing lower right,” and it is lightly struck by the cancel.

The example in this sale is accompanied by a 2014 certificate from Professional Stamp Experts, and is listed by Regency-Superior with an estimate of $55,000.

The auction offers another scarce variety of the 1¢ blue, an unused type 1a (Scott 6), one of 10 or so original gum singles known, according to Regency-Superior.

Though this example has small corner creases at top and disturbed gum, it also boasts margins clear of the design. With a 2015 PSE certificate, it is featured with a $45,000 estimate.

Collectors will also find a selection of U.S. plate blocks and full sheets on offer, with a couple of unusual modern varieties among them.

The worldwide selection begins with Great Britain and British Commonwealth classics, and includes material from around the globe.

From Korea comes a substantial number of imperforate souvenir sheets from the 1950s with a nice range of appealing topical subjects.