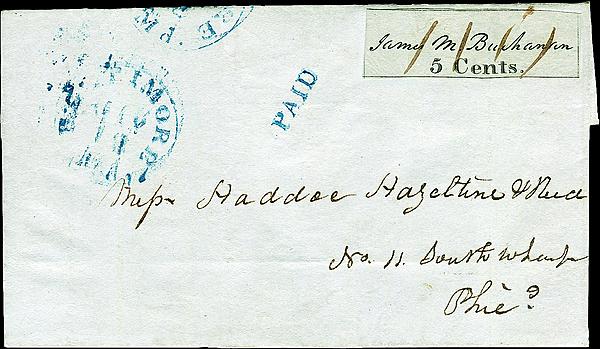 A cover franked with the 1845 5¢ James M. Buchanan black on bluish Baltimore postmaster’s provisional will be offered during the upcoming Regency-Superior auction. 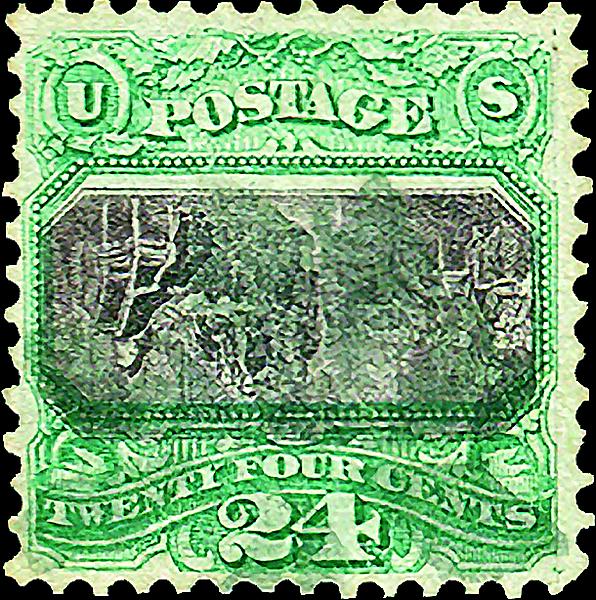 The Oct. 18-19 Regency-Superior auction at the Sescal stamp show in Los Angeles, Calif., includes this example of the 1869 24¢ green and violet Declaration of Independence stamp with center inverted.

The show (and the auction) are taking place at the Hilton Los Angeles Airport Hotel in Los Angeles, Calif.

Additional information about the Oct. 17-19 stamp show can be found in this issue on page 23.

The auction includes some classic U.S. bicolor inverts, starting with the 1869 24¢ green and violet Declaration of Independence stamp with the center inverted. This used example is struck with a very light circle of eight wedges cancel that leaves a nearly unobstructed view of the upside-down vignette.

Regency-Superior describes the stamp as having clear margins all around, with nice color and registration: “Easily one of the most nicely centered and visually pleasing examples of the used 24¢ inverts known to exist.”

The stamp is offered with 2011 Professional Stamp Experts graded certificate (fine 70, used) and an estimate of $50,000.

The auction also includes three examples of the U.S. 1901 4¢ red brown and black stamp with inverted center from the Pan-American set.

The 4¢ invert (Scott 296a) was not an error in the traditional sense: it was created as a special printing following a request from Third Assistant Postmaster General Edwin C. Madden. Two sheets of 200 were printed, and an unknown number of these were overprinted with the word “Specimen” (296aS).

Some stamps were destroyed, but 203 stamps were distributed as gifts from Madden, or through the sale of stamps from a pane of 100 donated to the Post Office Department for the National Museum in Washington.

One of the stamps up for auction is described as a choice example with exceptional centering, full original gum (previously hinged), reperforated at top, but otherwise sound and extremely fine. It has a 1999 Philatelic Foundation certificate and carries a presale estimate of $37,500.

The second, though not quite as well centered, example has nicer gum than normally found, according to the auction description, “with a few thin spots and a minor crease, fine.” It is accompanied by a 1958 Philatelic Foundation certificate, and lists with a $17,000 estimate.

The auction also includes a specimen example of the 4¢ invert with the dull purple overprint “mostly removed at upper right,” according to the auction description.

It has faults, including a small repair, but is described as a great looking example, and has a 2014 Philatelic Foundation certificate. It is listed with an estimate of $5,000.

The letter is mailed from Baltimore to Philadelphia with correspondence for an order of boots, shoes and slippers.

The stamp bearing Postmaster Buchanan’s signature is affixed at upper right. Two blue Baltimore postmarks are struck at upper left on the folded letter, and a blue “PAID” marking hits the center of the upper section.

The cover’s 2011 PSAG (Philatelic Stamp Authentication and Grading) certificate notes this is a “professionally restored cover,” offered by Regency-Superior with a $10,000 estimate.

An attractive cover for the 1930 second trans-Atlantic flight of the airship Columbia on offer is signed by pilot Capt. J. Errol Boyd and navigator Lt. Harry P. Connor.

The cover is one of only two envelopes handed to the crew in Montreal before the airship’s flight from Harbour Grace, Newfoundland, to England, according to Regency-Superior.

It is addressed to Montreal for the round-trip journey, and franked with the Canada George V 2¢ dull green stamp, which is not canceled, and the Newfoundland 4¢ Prince of Wales stamp struck with the Harbour Grace circular datestamp.

Online bidding is available through the Regency-Superior website, but there is no live online bidding during the auction sessions: Online bidding closes one hour prior to auction time.