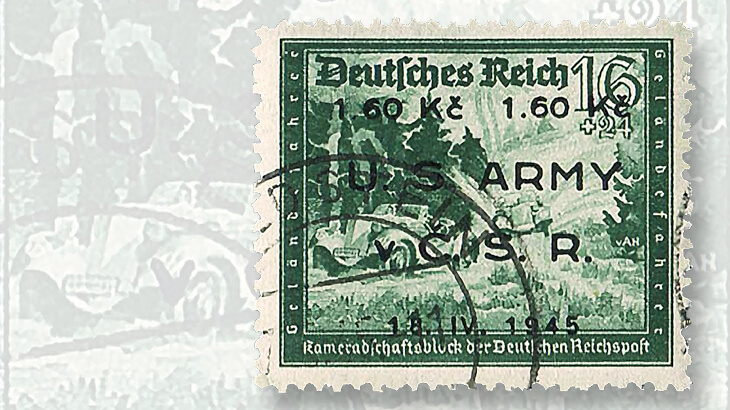 A set of seven German stamps privately overprinted to celebrate the American arrival in the former Czechoslovak republic at the end of World War II sold for $312 at Regency-Superior’s auction at Stampshow in August.

Among Regency-Superior’s worldwide offerings in its Aug. 6-7 sale at Stampshow was a local propaganda issue from Czechoslovakia at the end of the war.

The interwar Czechoslovak republic was carved up by Hitler beginning in 1938, with his annexation to the German Reich of the Sudetenland, a majority German-speaking region on the periphery of Bohemia. Examples of prewar Czechoslovak stamps locally overprinted with swastikas and the words “Wir sind Frei!” (We are free) are fairly common.

Less frequently encountered are the reverse example: German stamps unofficially enhanced by liberated Czech towns at the end of the war. U.S. forces under Gen. George S. Patton were sweeping across Germany and entered what had been Czechoslovakia in April 1945, liberating Pilsen on May 6.

A set of seven German stamps (Scott B270, B272-B277) were privately overprinted “1.60 Kc/U.S. Army v C.S.R./18 IV 1945” in honor of the Americans’ arrival in the former Czechoslovak republic. Not listed by Scott and only footnoted in Germany’s Michel catalog, the set, with matching late-May postmarks from the town of Wildstein (modern-day Skalna, near Karlovy Vary) sold for $312, including Regency’s 20 percent buyer’s premium.