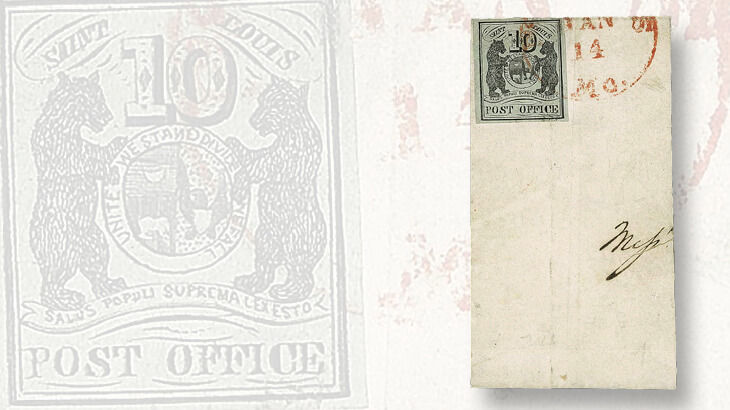 A 10¢ St. Louis Bears postmaster’s provisional on greenish paper, tied to a cover piece by a red St. Louis datestamp, sold for $12,000 at Regency-Superior’s Stampshow 2016 auction. 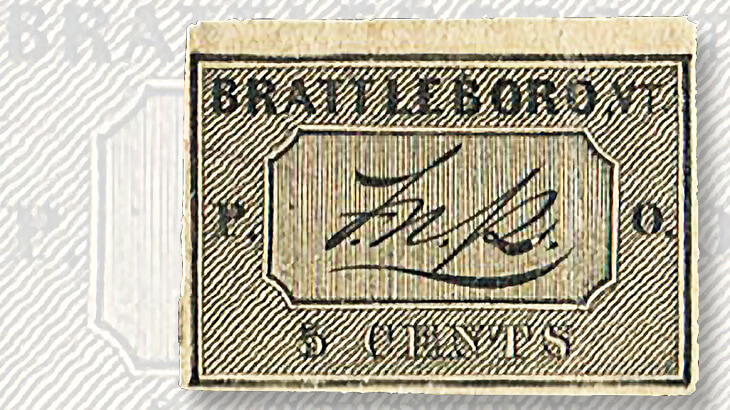 An exceptionally nice example of the postmaster’s provisional from Brattleboro, Vt., was offered by Regency-Superior at Stampshow 2016. It sold for $8,100. 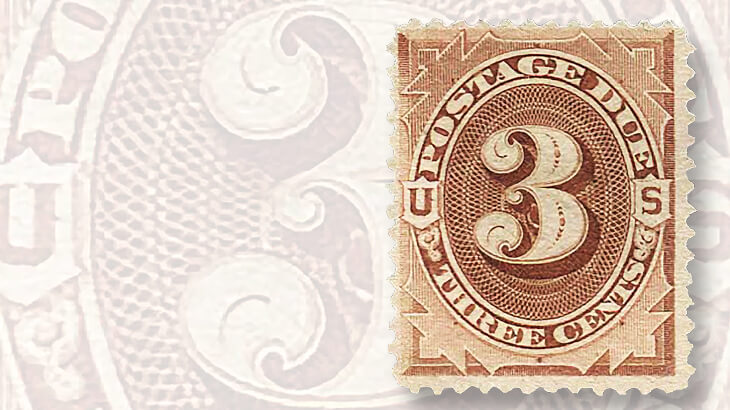 One of only seven sound examples left from the original 436 of an 1879 special printing of the first 3¢ postage due stamp fetched $7,200 at Regency-Superior’s Stampshow 2016 auction. 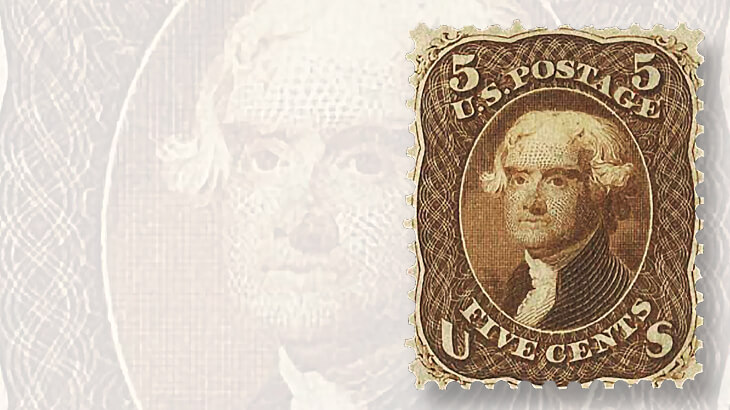 Regency-Superior sold a premiere gravure of the 5¢ Jefferson stamp of 1861, ungummed and reperforated on one side but scarce and with excellent color, for $12,000 at Stampshow 2016.
Previous
Next

St. Louis-based Regency-Superior’s Aug. 6-7 sale at APS Stampshow opened with some early postmasters’ provisional stamps, locally made in the 1840s before the first nationwide U.S. stamp issue. Most surviving provisionals are nothing but crude handstamps, and very rare, although in a handful of larger cities — New York, Baltimore, St. Louis, Providence, R.I., and Brattleboro, Vt. — the effort was made to produce engraved adhesives, of which some quantities survive.

An exceptionally nice example of the postmaster’s provisional from Brattleboro, Vt. (Scott 5X1), was offered in the Regency sale, described as very lightly canceled and with a couple of trivial faults. It sold for $8,100, including the 20 percent buyer’s premium the firm adds onto all hammer prices.

These stamps, which also were issued in denominations of 5¢ and 20¢, are nicknamed “Bears” because of the Missouri coat-of-arms design they depict, and command a premium when they are canceled by a datestamp instead of a pen marking.

Among U.S. stamp issues offered by Regency-Superior was a so-called “premiere gravure” of the 5¢ Jefferson of 1861, a stamp now listed as Scott 67-E9e though described by Regency using its old Scott catalog number, 57.

The premiere gravures were early versions of the issue of 1861 that in some small details differed from the bulk of the issued stamps. Most show a prooflike impression of the design that has led experts to believe they were mostly just that: trial color proofs or essays.

Their classification has proven controversial among dealers and auctioneers. Once listed as regular stamps in the main body of the Scott U.S. Specialized catalog, the premiere gravures were reclassified as essays many years ago, although some stamp professionals nonetheless continue to refer to them by their former catalog numbers.

The 5¢ Jefferson premiere gravure differs from the issued stamp, Scott 67, in lacking tiny leaflets in the corners. The example in the Regency sale, without gum and reperforated on one side, but nevertheless scarce and attractive with excellent, rich color, sold for $12,000.

Among back-of-the-book issues, an 1879 special printing on soft, porous paper of the first 3¢ postage due stamp (Scott J10), was described as being one of just seven sound examples to survive, out of an original quantity of 436. It went for $7,200.