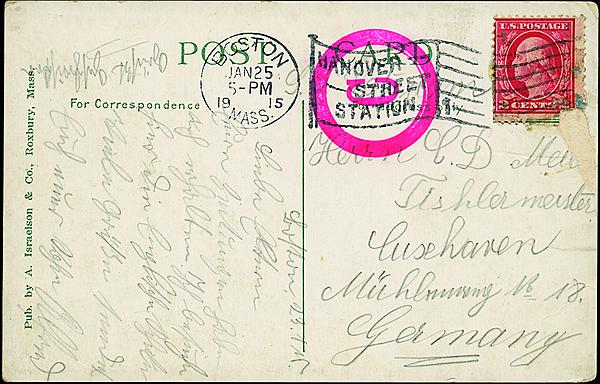 Sent in 1915 from Boston to Germany, this postcard has an unusual red circled “C” marking. 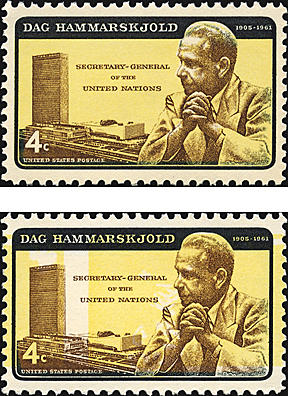 The original 4¢ Dag Hammar­skjold commemorative stamp at top, and the invert version at bottom. Because the yellow is hard to see, the variation is subtle, but note the white background around the United Nations building as the most obvious feature of the invert. 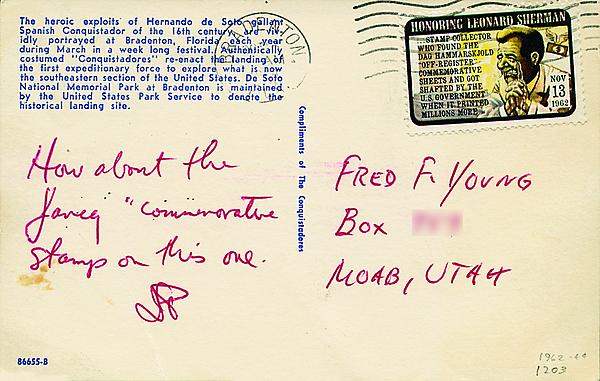 Leonard Sherman discovered a full pane of 50 Dag Hammar­skjold commemoratives with the yellow background color inverted shortly after the stamp was issued in October 1962. Alerted to the problem, the U.S. Post Office Department chose to print and sell 40 million of the inverts. This postcard went through the mail in 1964 with a faux stamp. The label honors Sherman with a caricature and bemoans the action of the Post Office Department.

The strangest things manage to make it through the mail in place of postage. The example pictured here reflects what was, at the time, a huge philatelic story that got significant play in the daily nonphilatelic press.

That stamp became world famous when a collector, Leonard Sherman of Irvington, N.J., discovered a pane of 50 with the yellow inverted.

Others around the country made similar discoveries, but the press release focused on Sherman.

In doing so, the U.S. Post Office Department simultaneously added significant income to its coffers, destroyed the value of the inverts found from the normal printing, and enraged a good share of the stamp collecting community.

The knock-off on the postcard was created as a protest. Its text reads, “Honoring Leonard Sherman, stamp collector who found the Dag Hammarskjold ‘off register’ commemorative sheets and got shafted by the U.S. Government when it printed millions more.”

I have seen non-invert varieties of the normal stamp where the yellow is misregistered, and they are far more scarce than the inverts, but color misregistrations don’t get catalog listings.

Boston, Mass., had a population of about 700,000 in 1915 when the postcard shown here was mailed to Germany. World War I had begun, but the United States was not yet a combatant, so mail was not embargoed.

Despite the volume of mail that must have been sent from Boston, perhaps Germany was an unusual international address at this time. Certainly, I have never seen another postcard or letter with the circled red “C,” and I wonder if it has postal meaning.

Could it indicate censoring?

If anyone among Linn’s readership can explain this marking, please contact me, John Hotchner, Box 1125, Falls Church, VA 22041; or by e-mail at jmhstamp@verizon.net.