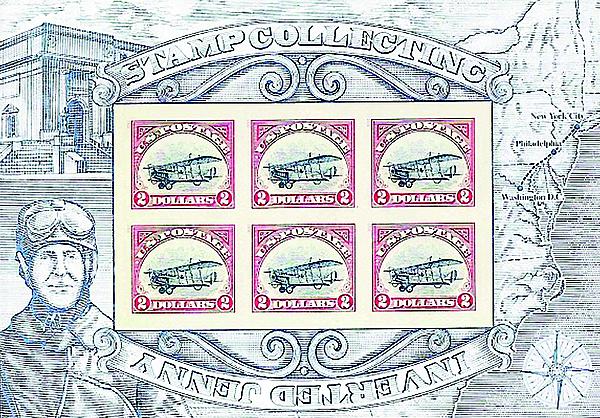 Revelations of who purchased the world’s most famous stamp, the British Guiana 1856 1¢ Magenta, and the elusive United States upright $2 Jenny Invert pane were among the top stories in 2015 for stamp collecting.

These stories and other philatelic reports in 2015 not only made headlines in Linn’s Stamp News, but also captured worldwide media attention, providing much positive exposure for the hobby.

The year 2015 proved to be an exciting year for stamp collecting. Selecting 10 of the top stories for the year is not an easy task and is arguably a subjective process, but the following are my picks for the most important stories for 2015.

They are presented in chronological order, not necessarily in order of importance.

Linn’s Jan. 19 issue reported that a collector in Atlanta received a free upright $2 Jenny Invert pane from the United States Postal Service for having previously purchased a Jenny pane, generating bad publicity for the USPS and creating an uproar among disgruntled collectors, some of whom had spent hundreds of dollars hoping to find the elusive, intentionally created variety.

As the story developed early in January, Linn’s discovered that three lucky collectors had received an upright Jenny Invert pane, complements of the Postal Service.

This act of generosity by the USPS alienated collectors who, hoping to find the upright variety, had purchased large quantities of the Jenny pane, and drew sharp criticism from the inspector general of the USPS for the creation and distribution of the upright Jenny panes.

The Feb. 9 issue of Linn’s reported that CBS Sunday Morning correspondent Rita Braver revealed in her Jan. 18 story about stamp collecting that PIMCO investment firm founder and philanthropist William H. Gross was the purchaser of the upright $2 Jenny Invert pane discovered in 2014 by David and Gail Robinson.

Lick-and-stick stamps on brink of extinction

In a 10-minute presentation to the Postmaster General’s Mailers’ Technical Advisory Committee in Washington, D.C., USPS Stamp Fulfillment Services manager Khalid M. Hussain dealt a major blow to one of the great traditions of stamp collecting: soaking stamps off envelopes.

Hussain revealed a plan that suggested ending all production of stamps with moisture-activated adhesive, and printing all new stamps “and reprints” as self-adhesive stamps.

The sad news was delivered to readers in the March 23 Linn’s issue and drew immediate criticism from collectors.

In the March 30 Linn’s, readers learned that the printing plate for one of the world’s most sought-after stamp rarities had been rediscovered.

The copper printing plates used to print the 1847 Mauritius 1-penny and 2d “POST OFFICE” stamps, the first colonial issues of the British Empire, were rediscovered by the family of tobacco industrialist and stamp collector Maurice Burrus, following the death of his niece Odile Burrus.

The stamps disappeared from view following their display at the 1935 Silver Jubilee exhibition of the Royal Philatelic Society London. The rediscovered plates were exhibited in May 2015 at London 2015 Europhilex.

The Postal Service’s mishaps continued as the year progressed.

The April 27 issue of Linn’s revealed that the quote on the new Maya Angelou forever stamp was misattributed to the stamp’s honoree.

The quote, “A bird doesn’t sing because it has an answer, it sings because it has a song,” was not written by Angelou, but is attributed to Joan Walsh Anglund. The quote was taken from Anglund’s 1967 book of poetry, A Cup of Sun. It was a favorite of Angelou’s.

The May 4 Linn’s reported that the stamp would not be recalled.

The May 11 issue announced that Mary-Anne Penner, a career postal employee, would take the helm as acting director of USPS stamp services, following the retirement of acting director Cindy Tackett.

In an email to Linn’s in July, Penner endeared herself to collectors when she said she would like to see a return to soakable stamps.

A story in the June 22 Linn’s disclosed that world-renowned shoe designer Stuart Weitzman is the new owner of the world-renowned stamp, the unique British Guiana 1856 1¢ Magenta.

Weitzman, also known for his philanthropic work, paid almost $9.5 million for the iconic stamp at an auction held in June 2014 in New York.

The Smithsonian’s National Postal Museum announced that Weitzman was the owner in a press release that also broke the news that the stamp would be on display at the museum until November 2017.

I’ll veer slightly from the chronological order of this list of top stories. In the Oct. 12 issue, Linn’s reported that the NPM announced that the world’s most valuable stamp, the 1¢ Magenta, will travel to New York next May, where it will be on display at World Stamp Show-NY 2016.

The once-in-a-decade international stamp show promises to be on this list of top headlines for 2016.

The U.S. Postal Service was not alone in design-error woes in 2015. Canada Post had its own problems with stamps depicting inaccurate images of the Hoodoo rock formations.

Unfortunately, the Hoodoo formations shown on the stamp were from East Coolee, Alberta, 60 miles from the park.

Canada Post recalled the booklets and souvenir sheets with $1.20 stamps depicting inaccurate images with the intention to destroy them.

However, the Aug. 3 Linn’s reported that some of the stamps were sold before the recall, and these stamps were “hot properties” on eBay, the Internet auction website.

In the Oct. 26 issue, Linn’s reported the recovery in late September of a block of three of the 1845 5¢ New York postmaster’s provisional. The block was once part of a larger block of 10 that was stolen in 1977 from the famous Benjamin K. Miller collection at the New York Public Library.

The stamps will be returned to their rightful owner, the New York Public Library. The Miller collection currently is on loan to the National Postal Museum, and stamps from the collection are on display in the museum’s William H. Gross Stamp Gallery.

Although Linn’s reported on many important stories throughout 2015, these are my picks for the top 10. If you have additional choices, or if you think other stories are more worthy than those I’ve chosen, please share your thoughts with me.

In closing, I commend Linn's editors and contributors for their stellar performance in reporting the news of the stamp hobby. A tip of the hat to those who provide us with story leads.

We send our warmest holiday wishes to our loyal readers and their families. We look forward to the coming year with much excitement and anticipation.