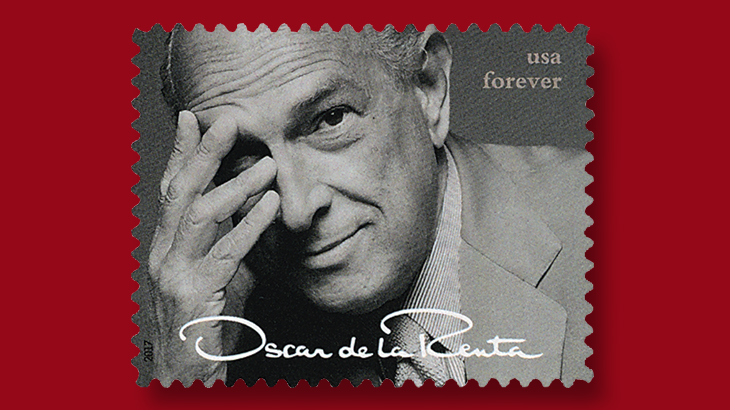 The Oscar de la Renta forever stamp issued Feb. 16, 2017. The acclaimed fashion designer is one of three individuals honored on a 2017 U.S. stamp less than three years after the subject’s death.

That revised ruling prohibits honoring living people and establishes a waiting period of three years after a person dies before they will be honored on a U.S. stamp.

The exact wording is: “Living people will not be considered at the present time. Beginning in 2018, proposals for a deceased individual will be considered three years following his/her death.”

Since early in 2014, the stamp subject criteria set by the U.S. Postal Service and its Citizens’ Stamp Advisory Committee have not stated a specific waiting period before a deceased individual can be honored.

For many years, the guideline was a 10-year wait. That was briefly changed to a five-year wait before the criteria for waiting was dropped altogether.

Another rule related to the new waiting period notes that the U.S. stamp programs are planned and developed two to three years in advance, and advises that in order to be considered, subject matter suggestions should be submitted three or more years in advance of the proposed stamp.

The new three-year waiting period to honor deceased individuals goes into effect after three stamps were issued in 2017 for men who had died less than three years before the stamps honoring each were issued.

The first commemorated fashion designer Oscar de la Renta with a set of 11 forever stamps: 10 showing dresses from his fashion collection, and one picturing him in a black-and-white photo.

Robert Panara, a pioneer in education for the deaf, was honored on a single 2-ounce-rate stamp issued April 11: two years, eight months and 23 days after his death at age 94 on July 20, 2014.

The Postal Service also arranged a swift commemoration for Father Theodore Hesburgh, the longtime president of the University of Notre Dame.

The stamp subject selection criteria currently lists 11 guidelines to be considered by CSAC to determine who or what should be honored on U.S. stamps.

While the committee reviews public stamp subject suggestions and artwork created by USPS art directors and the illustrators they work with, the postmaster general has always had the final say in the matter.

The committee considers stamp subject suggestions submitted by interested Americans and provides the selection criteria so that someone making a suggestion understands what is required to qualify as an appropriate U.S. stamp subject.

The criteria, for example, explain that stamp subjects include themes of widespread national appeal and significance, and positive contributions to American life, history, culture and environment.

The committee has been evaluating public stamp proposals since it was established in 1957.

A detailed description of the stamp selection process is also provided online.